We had our whole family together in August for an Alaska cruise.

Mimi and I celebrated a milestone anniversary with the trip of a lifetime with our family this year. And two months later, I shared an experience with my sons that we had been anticipating for 29 years.

Family tops work and health for us, so those two family experiences get top billing in our reflections on 2014. The new job and cancer diagnosis were big developments too. You’ll read about them, if you haven’t already, toward the end. But these were bigger:

Grizzlies were a highlight of our Denali visit.

To celebrate our 40th wedding anniversary (Aug. 3), our wonderful sons and their families took us on an Alaska cruise, (Alaska being not only a spectacular destination but the 50th state I’ve visited). It was a delightful week with all three sons, two daughters-in-law, a fiancée and two granddaughters. The shipboard activities were fun (Gramps won the egg drop and Julia and Madeline enjoyed the swimming pool). The glaciers were awesome. The port excursions were adventurous (Mimi and Susie saw a whale breach, Joe and I landed on a glacier in a helicopter, Mimi and I drove a Jeep up into the Yukon Territory). When the cruise was finished, the sons and their families flew home, and Mimi and I continued on to more adventures at Denali National Park (we saw four wolves and heard one of them howl and saw three grizzly bears at pretty close range (but safe in our tour bus). I could go on and on about the Alaska trip, but I already did that.

As if that wasn’t enough special family time for one year, the Kansas City Royals went on an exciting post-season run that prompted a smaller, shorter but still spectacular family gathering just two months later. Back in 1985, when I took Mimi to Game 2 of the World Series between the Royals and St. Louis Cardinals, I promised to take Mike the next time the Royals were in the World Series. Well, he remembered. And the Royals finally made it back. And I delivered, not just for Mike but for Joe and Tom, too. We went to Game 2 again, and the Royals came through for us (they lost Game 2 in ’85). Alas, the World Series didn’t end as well for the Royals as it did in ’85.

From left, Mike, Tom, Joe and I converged on Kansas City for Game 2 of the World Series.

Mimi and I really enjoyed Venice.

Those two trips were so special that they pushed a lovely visit to Venice and Perugia, Italy, down to third place on the year’s travel highlights.

Our sons are doing well: Mike was recognized in the Twin Cities Business Journal’s 40 Under 40 project. Joe and Kim are enjoying growth in their business, Moxie Event Lighting, and hosted the whole family in Las Vegas for Thanksgiving (Joe smoked some scrumptious turkey). Tom worked on Senator Tom Harkin’s successful nomination of Kailash Satyarthi for the Nobel Peace Prize, and wrapped up his work for Harkin last week as the senator retired. Tom has a good lead on what we hope will be his next job. And our granddaughters steal our hearts at every opportunity. In addition to the cruise, Granny and Gramps got to dote on Julia and Madeline in an Easter visit to the Twin Cities and that Thanksgiving family gathering in Las Vegas.

We also gathered with Mimi’s family in Michigan in September to celebrate the wedding of David and Rachel Johnson.

Another family highlight of the year was that I was able to get two pieces of family history converted to digital video, an 8mm silent color film from the 1950s that includes my parents’ wedding day (and an aunt and uncle’s) and a TV station videotape from 1976 with my father preaching in his military uniform (he was retired then, but wore it to preach at a community Veterans Day service). 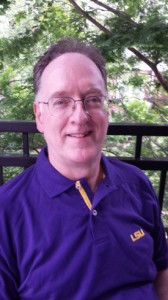 As for that job change: The hedge funds that own Digital First Media began exploring options to sell the company, so they decided my job and many more were expendable. I found my next opportunity teaching at LSU’s Manship School of Mass Communication. I’ve enjoyed my new challenges, which include coordinating students’ work in the Social Media News Challenge, funded by the Knight Foundation, and teaching an honors class of Introduction to Mass Media.

Mimi found a nice townhouse for us, with two extra bedrooms, so we hope you’ll come visit us in Baton Rouge (you can fly into here or New Orleans; we have easy access to both airports). Mimi works at home on her next novel and watches out for water moccasins as she walks Duffy around the pond outside our home. If you have cause to send snail mail, the address is 809 Summer Breeze Dr. #1007, Baton Rouge, LA 70810.

That cancer diagnosis is mantle-cell lymphoma, and chemotherapy started Dec. 20 (Mimi’s birthday, but she insisted we start ASAP). The chemo will be grueling, but chances for full remission are very good (87% in the study my oncologist showed me). As you may know, I kicked cancer’s ass back in 1999 and I’m planning to kick it again. If you’re not already following our updates on Caring Bridge, we’ll keep you posted there.

I’m not burying the lead or sugar-coating anything here. It sucks to lose your job and it sucks to have cancer. But I’ve changed jobs several times and I’ve had cancer before. The Alaska trip and the World Series game with my sons were once-in-a-lifetime treats and those blessings are what we will remember 2014 for. And even the disappointments brought great joy. The reluctant farewells to DFM colleagues quickly gave way to excitement about teaching and a warm embrace from LSU colleagues and students. And we will always cherish the outpouring of support from family and friends when I lost my job and learned about the cancer. Your prayers, emails, calls, texts, tweets, Facebook messages and in-person hugs lifted our spirits more than we can say, and we are deeply grateful.

I have a daunting chemo course ahead of me, followed by a stem-cell transplant. But by the time Tom and Ashley get married in October, lymphoma and chemo should be in the rear-view mirror. I will raise a toast to the happy couple, looking to the future, as you should on a wedding day.

We wish you all the joy of whatever holidays you celebrate and thank you for sharing in this special year!