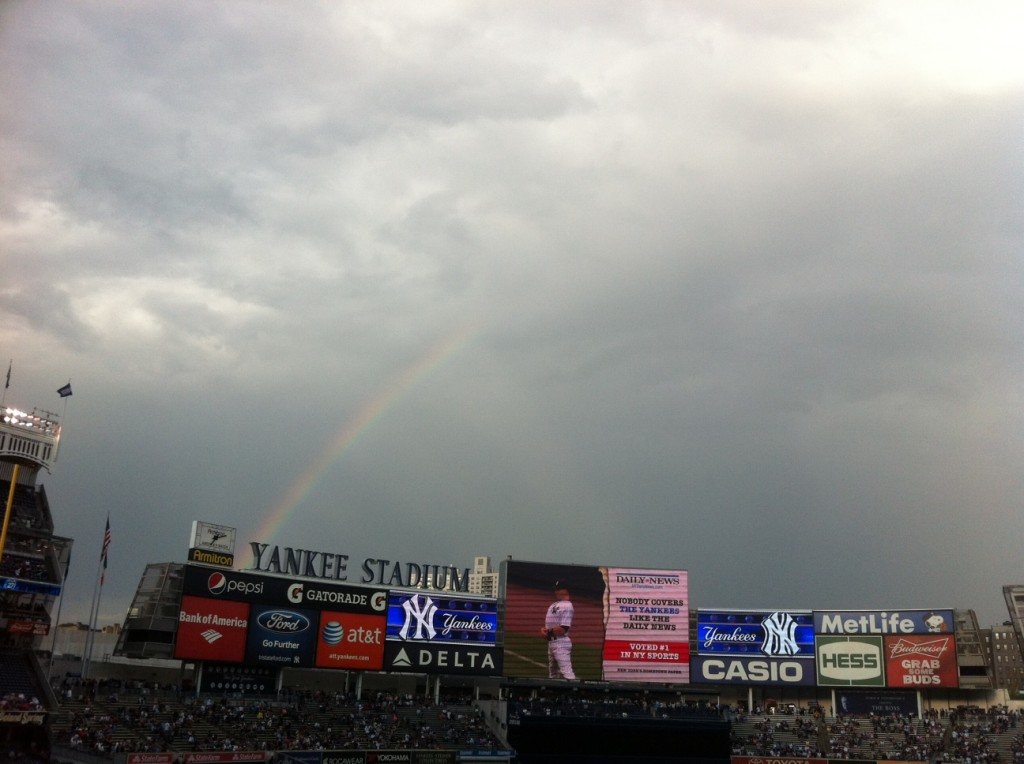 A rainbow is a traditional symbol of promise, unless it means my companion is taking her seat at Yankee Stadium.

I don’t believe in jinxes. But I do believe in facts, and a long-established fact in our family has been that the Yankees never win when my traveling companion is in the ballpark. Ever.

So I was a little concerned about taking her with me to new Yankee Stadium this week to watch the Yankees and Rays play. But I had never been in the ballpark (I know it’s a few years old now, but it’ll always be new Yankee Stadium, won’t it?) and hadn’t seen the Yankees play live for a few years. So we got Yankees tickets because, all kidding aside, I really don’t believe in jinxes. Besides, if you believed the weather forecast, we might not see a game at all.

We have a bit of a dispute about how many times she has seen the Yankees play. When we lived in Kansas City, I had part of a season-ticket package for the Royals, and traded tickets with others to see as many Yankee games as possible when they visited. Our three sons accompanied me to some of those games, but their Mom also claimed her share of the tickets. I figure she attended a game a year, which would be seven games in all. She claims it was one or two. Whatever it was, she never saw the Yankees win. END_OF_DOCUMENT_TOKEN_TO_BE_REPLACED

For this trip, my companion and I decided to take the Amtrak’s Acela from Washington, D.C. up to New York City. True, we do live only minutes away from the giant Dulles airport, and it’s also true that the air shuttle isn’t terribly more expensive than train tickets. And fighting weekday traffic into the city’s Union Station was a hassle. But once on board, it seemed like a pure pleasure compared to the hurly-burly of airport screening. No stripping down for the metal detectors, no loading/unloading all our electronic devices. On top of that, the seats are roomier and there’s no limit to what you can carry on.

So the trip up was great. The trip back … well, I’ll get to that later. END_OF_DOCUMENT_TOKEN_TO_BE_REPLACED