Today, I saw the Pietà again.

I was nine years old the first time I saw it, at the 1964 New York World’s Fair. When I close my eyes, I can still picture it: The room where it was housed was lit in blue except for the spotlights shining down on the sculpture. Visitors stood on slow moving walkways, allowing everyone a good, long view, while keeping the lines moving for those waiting. What I remember best, though, was how I lost my breath at first sight. Struck dumb, I stared and stared at Mary’s face, so incredibly young, the gentle, open grief so powerful it made me weak in the knees. It was the first time a piece of art evoked a physical and emotional response from me. If my mother would have allowed it, I’d have ridden over and over on that moving walkway for the entire day. If I had been asked what I most wanted to see on this trip to Italy, I would have said, “I want to see the Pietà again.”

This time, it was in St. Peter’s Basilica. There were no blue lights. There was no moving walkway. Visitors could spend as long as they liked. And I looked for a long, long time.

The first time I saw the Pietà, it was through the eyes of a child. Today, I saw it through the eyes of a grandmother. And I realized I have lived a lifetime with the image in the back of my mind. Sometimes I would think of it, when I held one of my own sons in my arms. I have watched one sister-in-law lose a teenage son through cancer, and throughout his illness, the vision of the Pietà quietly came to my mind. I saw another sister-in-law lose a son in a violent act of war, and, as I watched her weep as they closed the casket for the last time, again, Mary, holding the remains of her sacrificed son, haunted me.

My companion stood quietly, hand on my shoulder today, patiently waiting as again I stared, and stared and stared. I don’t think there’s a mother alive who can look at the Pietà and not feel the weight of her child in her arms, who doesn’t feel the overwhelming, staggering loss etched so eloquently in every line of the marble.

Today I saw the Pietà again. 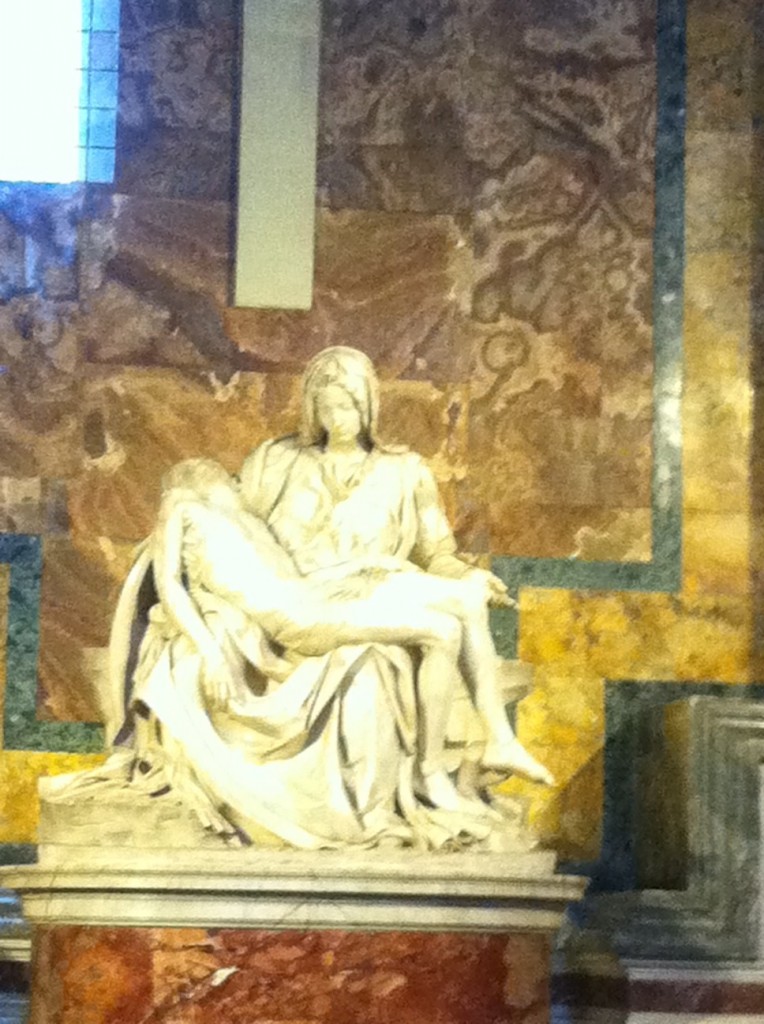