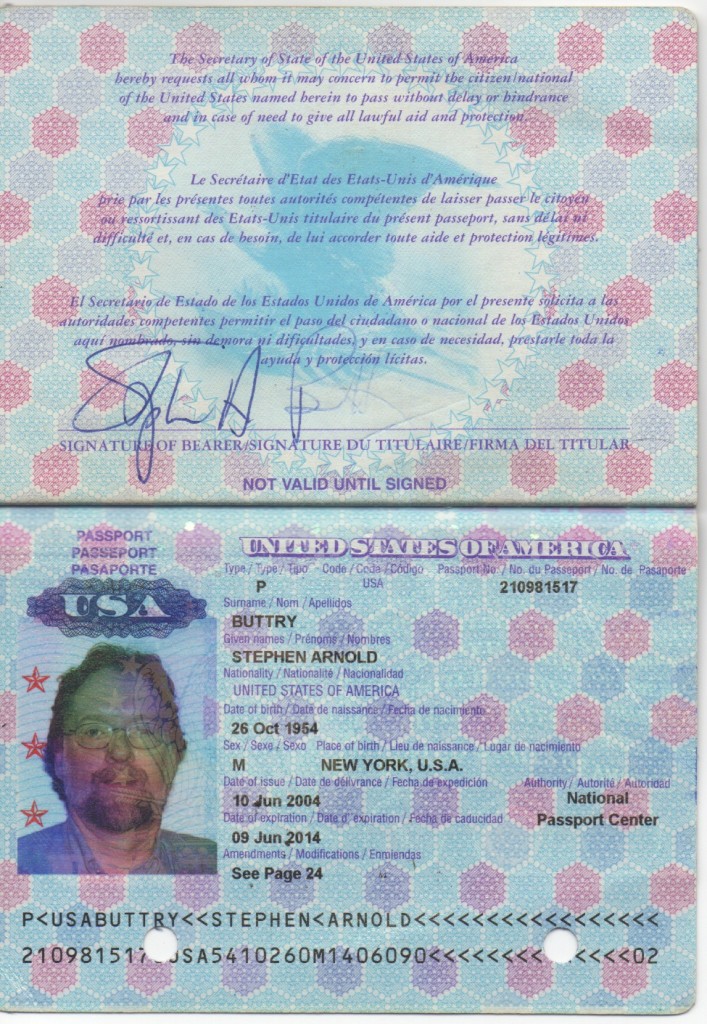 The pen ran out of ink as I was signing, but I never got a question about the signature in dozens of trips on this passport. 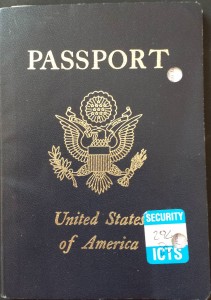 I’m traveling on a new passport in this trip to Italy.

Getting a new passport is no big deal, as long as it arrives before you need to travel. But the return of the old passport, with a couple holes punched through the cover, brings back a decade of travel memories. 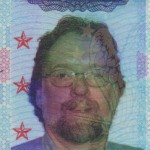 For one thing, that old mug shot that looked so bad 10 years ago (does anyone ever like their passport photo?) at least looks 10 years younger now. The sideburns were all white then, but the goatee part of my beard was still more pepper than salt. Sometime in the past decade, that beard turned all white, then I shaved it for vanity.

But the real story of an old passport isn’t the photo, it’s the stamps inside.

Oddly, I can’t find a stamp for my first trip on the passport, a 2004 visit to Tofino, B.C., for our 30th wedding anniversary. I see two other 2004 trips to Canada stamped, but not that August trip. I don’t know whether they didn’t stamp the passport that trip, or had the wrong date on their stamp, or perhaps the stamp was covered by one of the two visas that were pasted down over a full page (I always presumed they picked a clean page for those).

Other than the anniversary trip, all travel on the passport was related to work. Of course, we piggybacked a lot of personal travel onto the trips for employers, clients and conferences.

This trip, for instance, is for the International Journalism Festival, where I am a speaker on four panels. But we came a few days early for a visit to Venice.

I have two visas in the 2004 passport, from Saudi Arabia for a 2008 trip and Russia for a 2009 visit to Siberia. They were two of the more memorable trips I’ve ever taken. 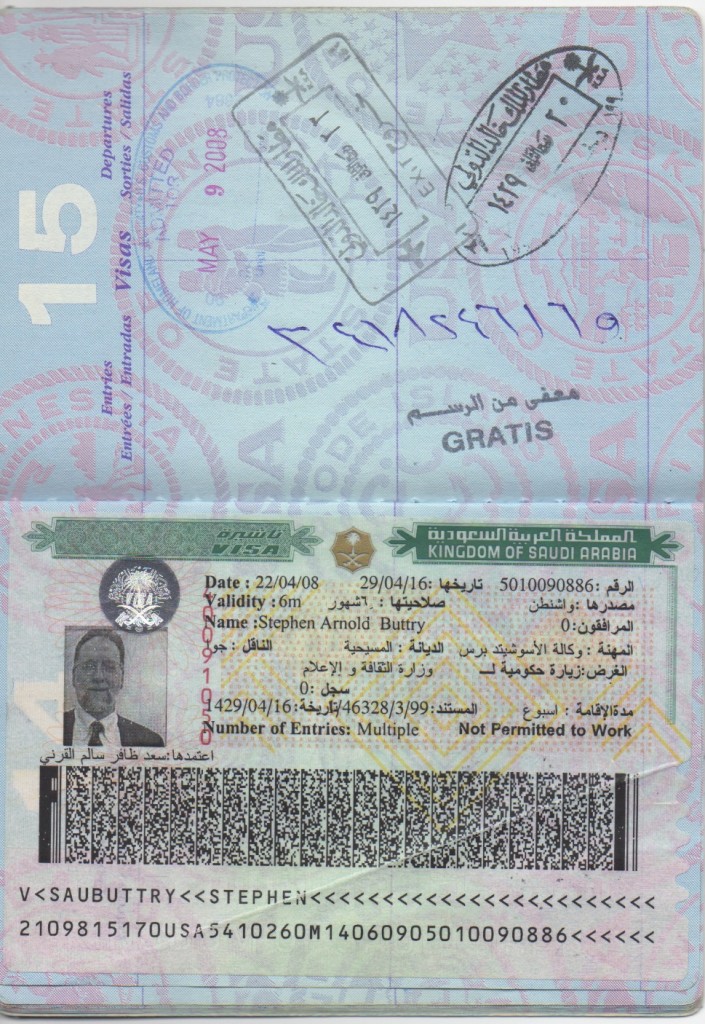 The trip to Saudi Arabia was one of the few where Mimi did not accompany me. Carol Ann Riordan and I represented the American Press Institute at the inauguration of the Prince Ahmed Institute of Applied Media Studies in Riyadh. API was negotiating with the Saudi institute to provide some training for Saudi journalists.

The gender discrimination in Saudi was clear from our greeting at the airport, where our hosts provided Carol Ann an abaya to wear. In the media offices, women journalists worked on a different floor from the men, though I was able to visit them with Carol Ann. They were hungry for training and Carol Ann insisted that any contract for training would include programs for Saudi women journalists.

Though Carol Ann was a vice president of API and I was just a director, the Saudis asked me to sign an agreement with the prince to pursue the negotiations, because I was a man. The agreement was just an agreement to continue negotiating, though, and API never got a contract to do training in Saudi. 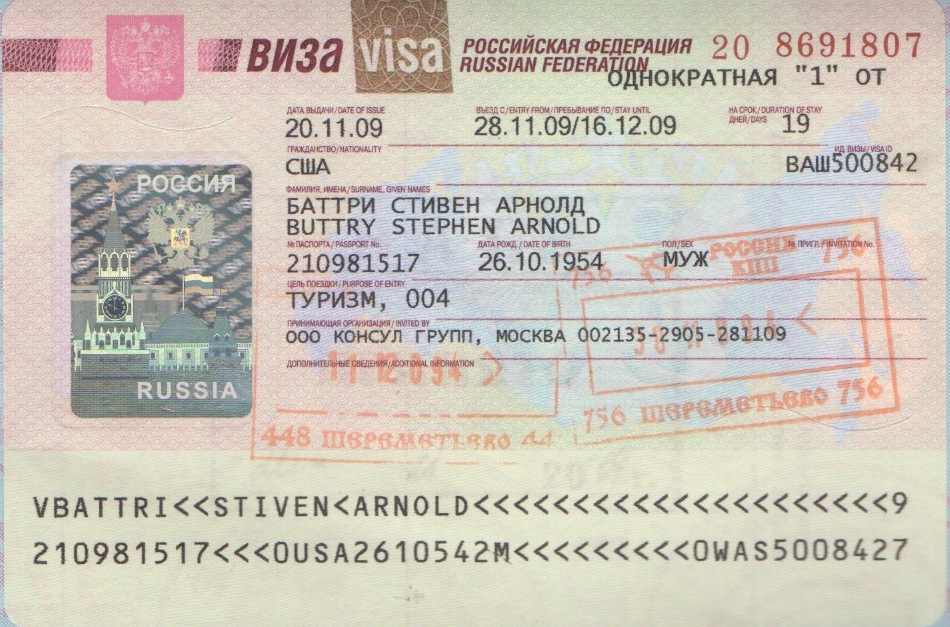 I chronicled the trip to Siberia in a series of posts in 2009, when I visited for a celebration of the 20th anniversary of the independent press in Siberia. I treasure the memories of friendly hosts and of journalists who were proud of their independent media. As I read of the growing power of the Putin regime, I hope my friends and colleagues there are able to maintain their independence.

The trip to Siberia included a wonderful walking tour in the December chill of Barnaul, the city where the conference was held. And after the conference, Mimi and I visited St. Petersburg and Moscow. 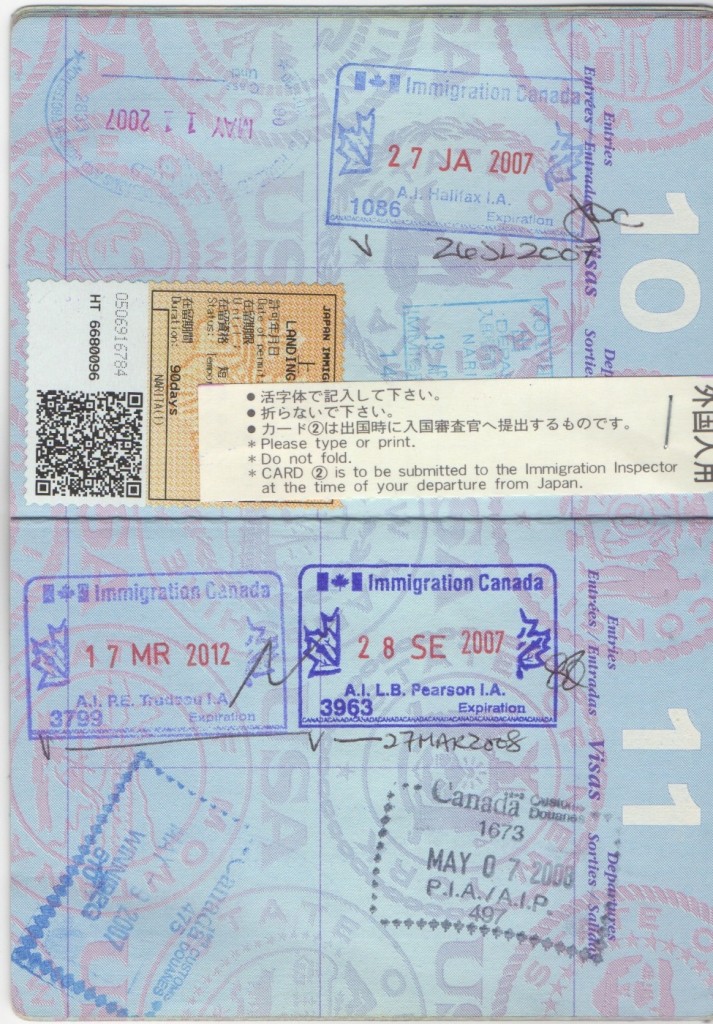 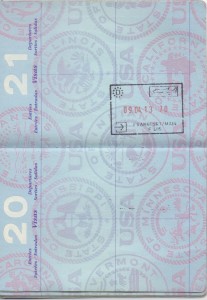 I got a paper stamp in my passport from a 2007 visit to Japan to do some workshops for Stars and Stripes, the newspaper serving American military troops who live abroad. That trip also included a stop in Germany for some training for Stars and Stripes staff there. The 2007 Frankfurt stamp is the only one on its pair of pages, while other facing pages are crowded with up to nine stamps.

The Stars and Stripes visits were sandwiched between two stateside events, so we were limited to two days of sightseeing in Germany and one in Japan (though Mimi had more time both places while I was doing my workshops). Both visits were memorable, though. We caught Mt. Fuji on a rare clear day, and it was spectacular. In Germany, we visited Heidelberg one day and Mainz the other. Our visit to the Gutenberg Museum in Mainz provided a closing for many Newspaper Next presentations and other speeches at journalism events.

I got two stamps for our 2008 visit to Ecuador (the month after the Saudi trip). Unlike most countries, they stamped it coming and going (I recall a fee to leave the country). One stamp was clean, but he other was kind of skewed and hard to read.

The Ecuador trip, for a Newspaper Next workshop for El Comercio, included a side trip to the equator, and walking tour of Quito in the rain and to the Otovalo market in the mountains outside Quito.

The Mexico stamp from a 2006 trip to introduce Newspaper Next to Latin American publishers and editors barely made it onto the edge of Page 24 of the passport. That trip included a visit to ancient pyramids as well as the Guadalupe Shrine. 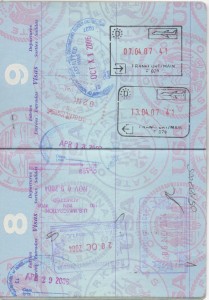 You don’t get a stamp every time you enter a country. A stamp at the Frankfurt airport is the only evidence of our 2013 trip that included visits to France (a conference about Russian media partnerships with my friends from Siberia),  Switzerland and Italy (last year’s International Journalism Festival, plus visits to Rome, Florence and Siena).

My trips to Canada resulted in at least 14 stamps entering that country in various locations (some of the stamps mention the city; some don’t). And I don’t think I got stamped every time I entered Canada (unless some are under those visas). I can’t recall exactly which of my Canadian trips were before or after the June 2004 issue of the old passport, but I count at least two dozen trips to Canada since getting the passport.

Mimi and I enjoyed some wonderful visits to Tofino, Cape Breton, Montreal, Ottawa, Toronto and other Canadian locations on the old passport.

Stops at airports in Amsterdam and Zurich didn’t even merit passport stamps. I had to wait for those at my destinations.

I’m breaking in a new passport on this trip to Italy, but it doesn’t have a stamp yet. Italian authorities waved us through the “passport control” station without a look at the new passport. But I’m expecting a lot of stamps before I have to replace this one in 2024.

Update: I did get an Italy stamp at the Rome airport today. I just rechecked the old passport and I don’t have one there. Not sure why I got one this year but not last year. 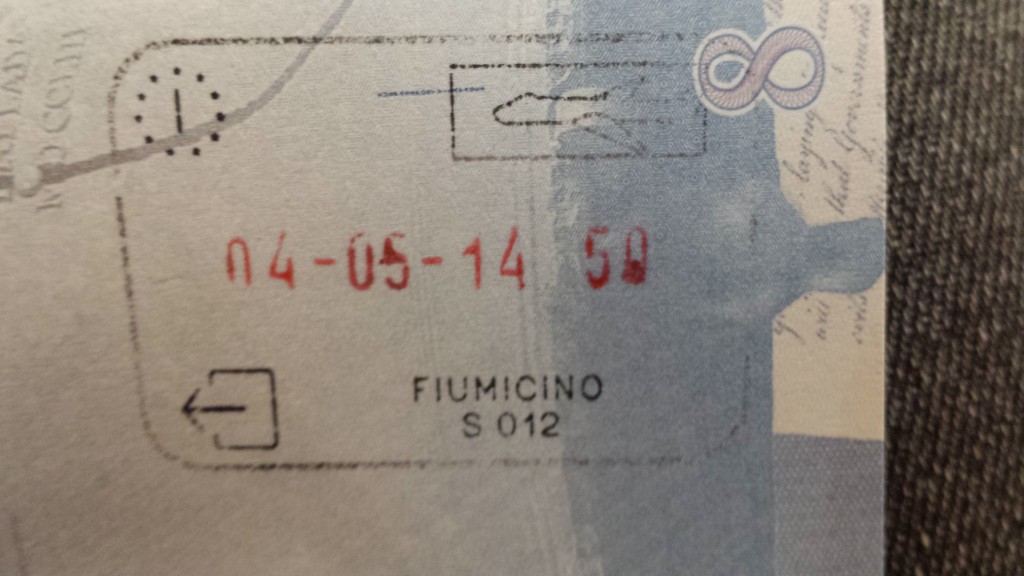