Here’s an ideal travel day: Sleep in. Enjoy a pleasant breakfast in a French bistro. A friendly cabbie explains why Lyon has the world’s best cooking as he drives you to a silk shop. A charming clerk helps you make your silk purchases. Walk down the quaint narrow streets of the Presq’île district to catch the parade of a Renaissance festival. Ride a funicular up a hill. Enjoy spectacular views of the city and the snow-capped Alps beyond. Browse the historic Basilica de Fourvière. View ancient artifacts in the Gallo-Roman Museum. Wander through the ruins of a Roman amphitheater. Enjoy a glass of wine outdoors, with views of the Alps in the distance. Sniff your way through the food stalls of Les Halles and buy some macaroons for the relatives you’ll be visiting the next day. Get back to your hotel for a brief afternoon nap. Accompany some new friends to dinner for melt-in-your-mouth seafood with more fine wine. And write a blog post. That was the Saturday my traveling companion and I enjoyed. 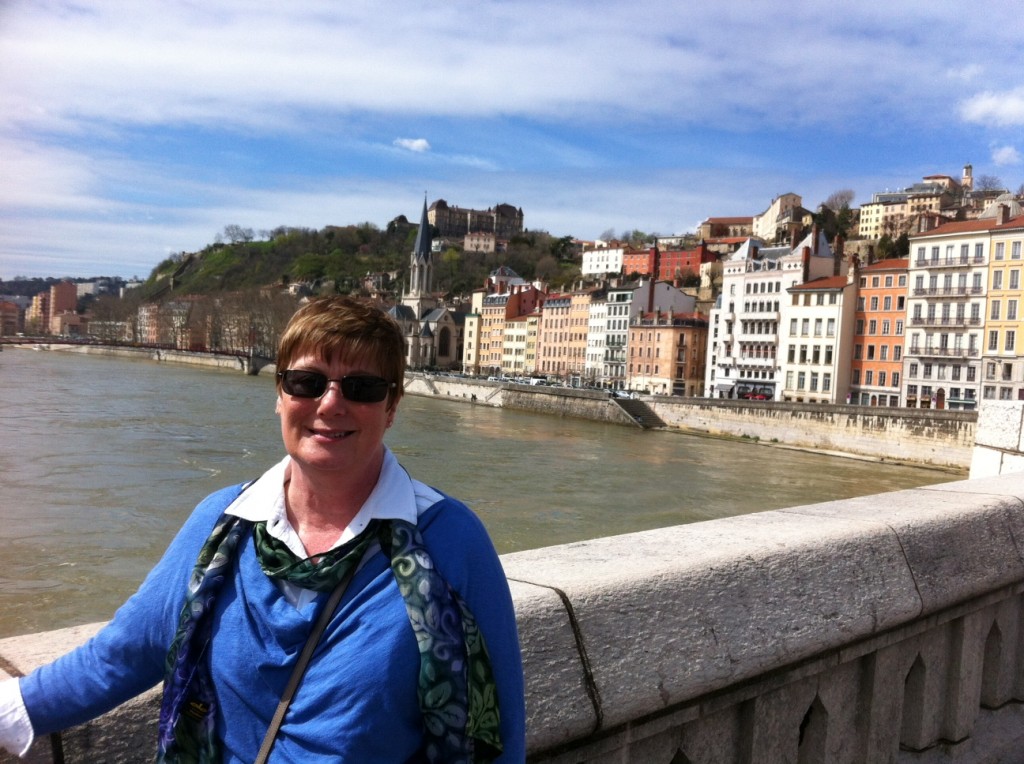 My traveling companion and I enjoyed a fabulous day in Lyon, including a walk across the Rhòne.

The quaint streets of old Lyon are more fun to walk, I’m sure, than they are to drive. 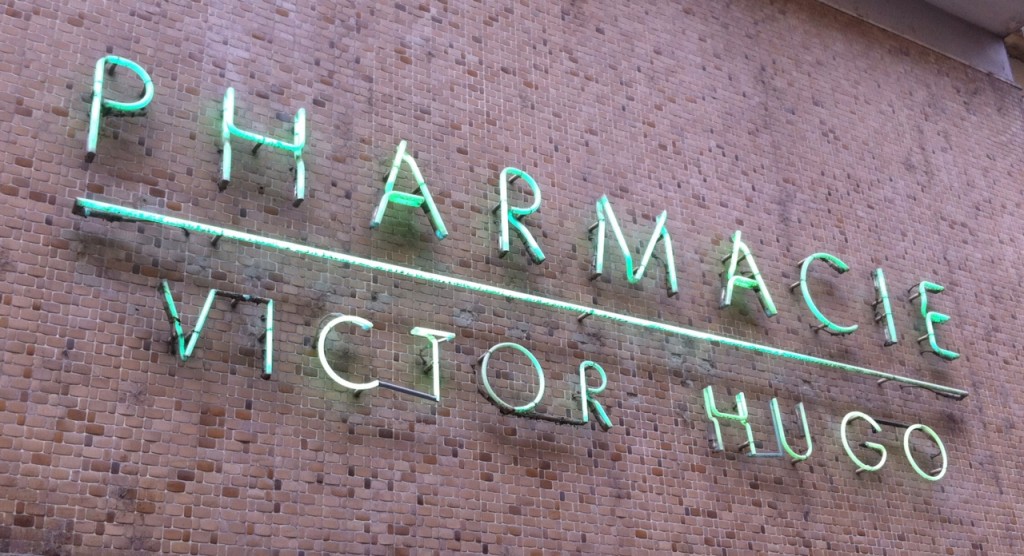 Where people in Lyon go when they’re feeling les miserables? 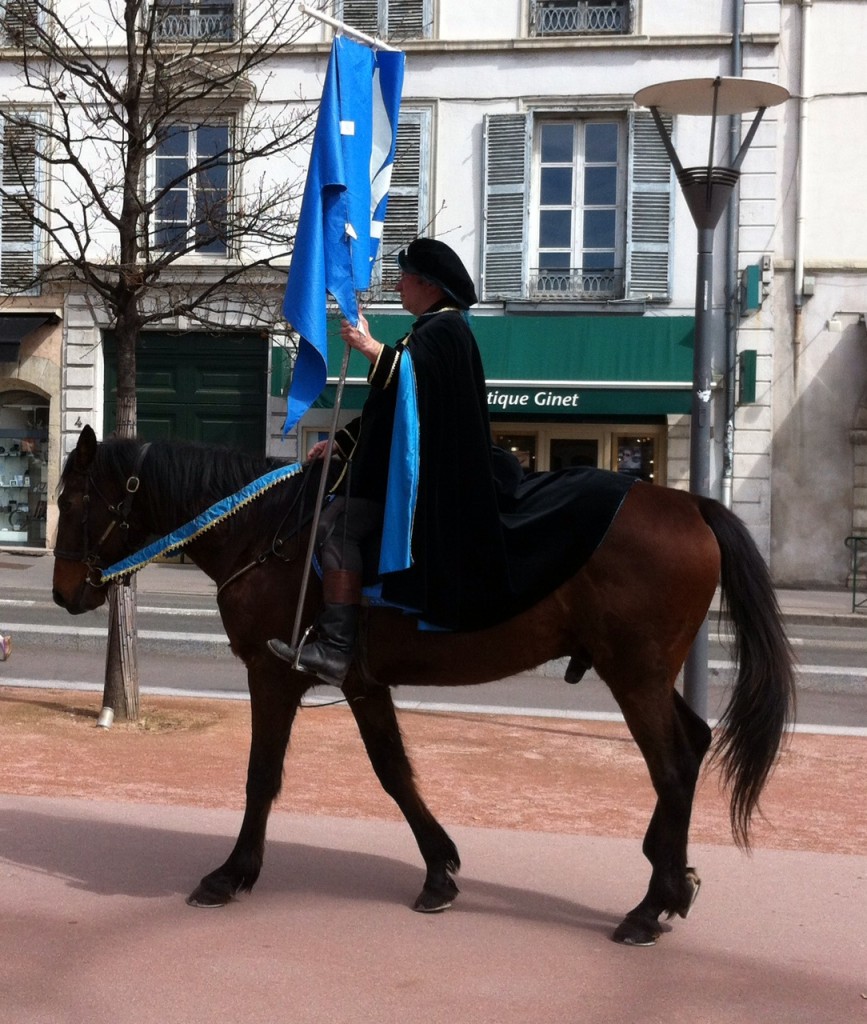 We happened upon a parade that appeared to be part of a Renaissance festival, starting in Place Bellecour.

I was not quick enough to catch the flag twirlers when they tossed their flags in the air. 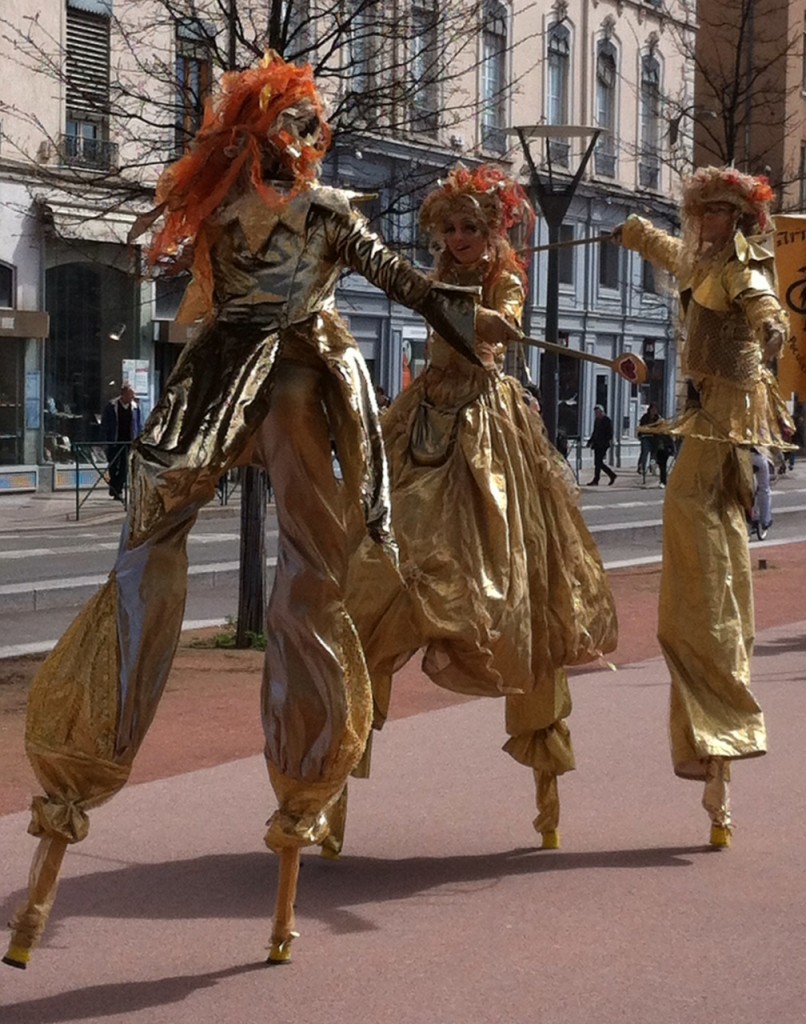 The most amazing part of the parade was these women on stilts. 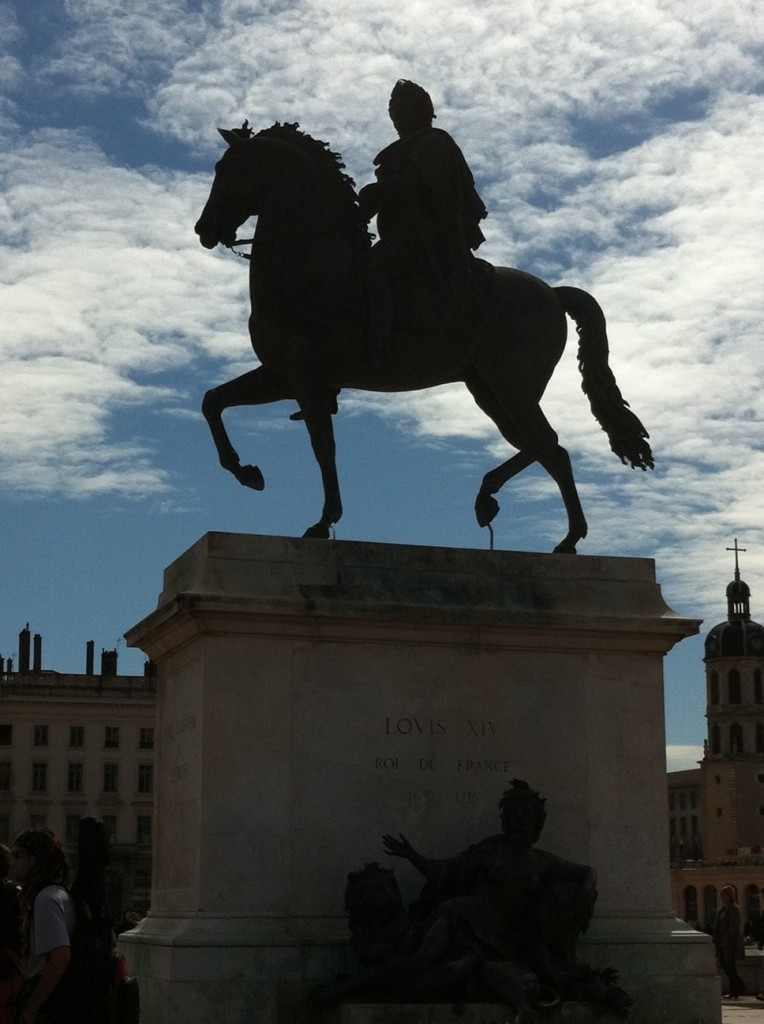 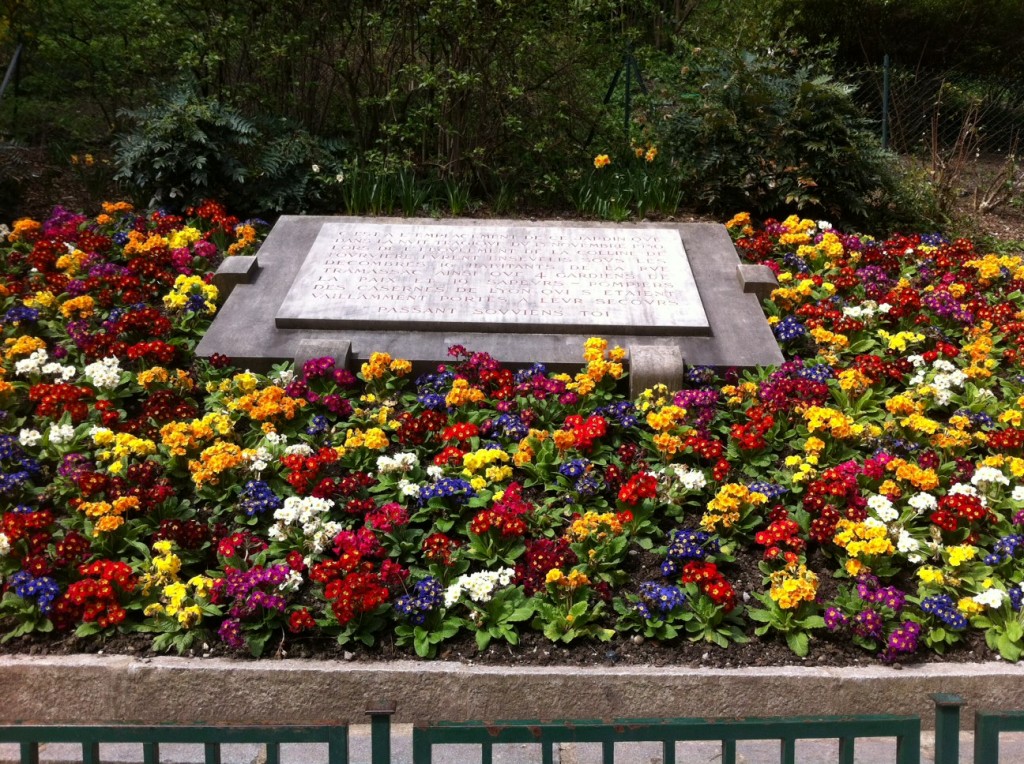 My woeful ignorance of the French language kept me from reading what this garden honors, but I did appreciate les fleurs. 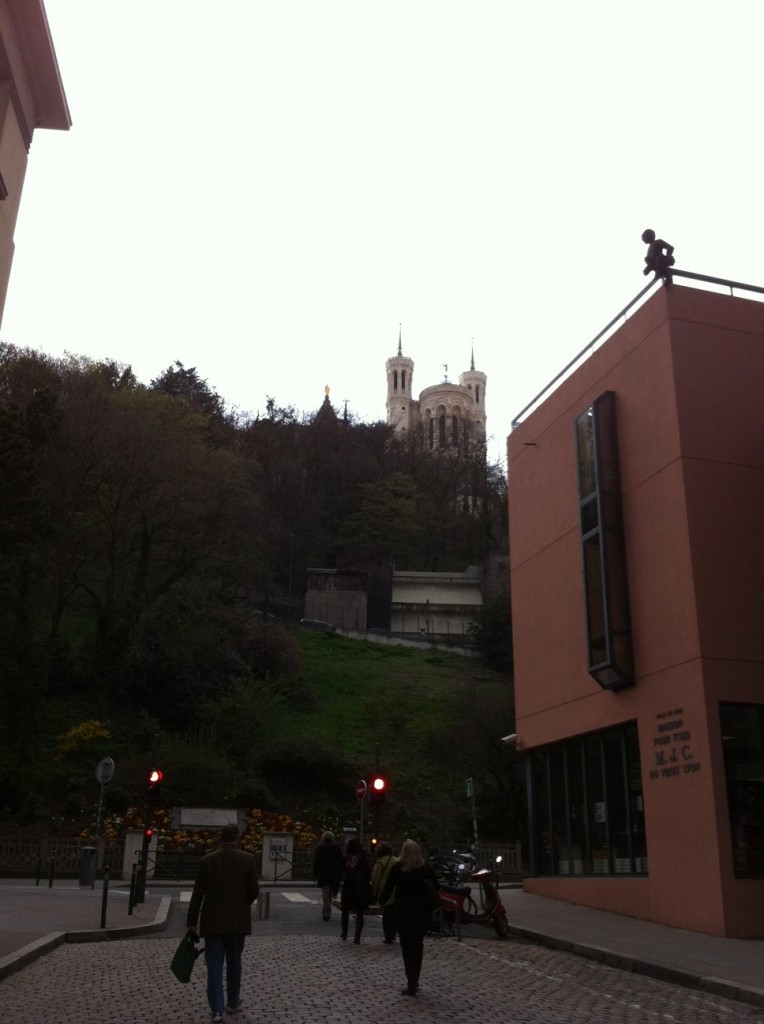 The basilica towers above Lyon. 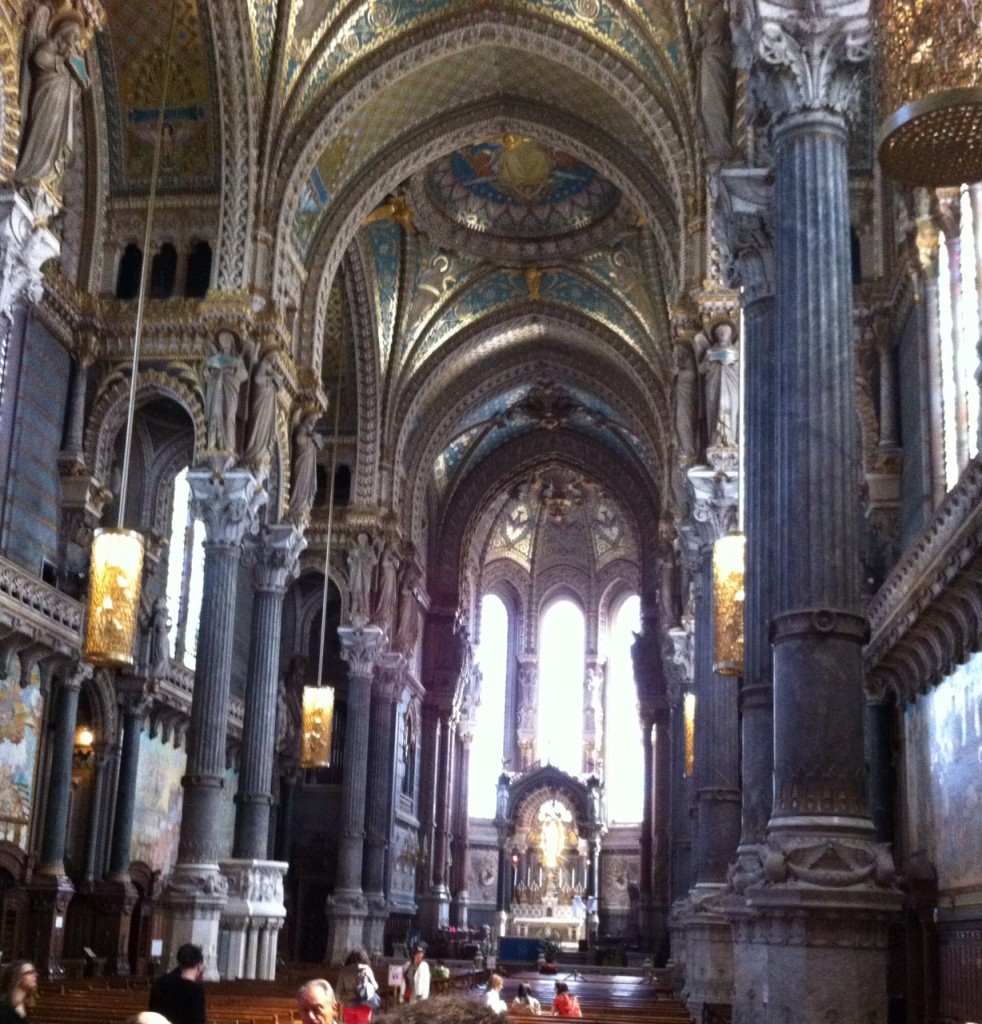 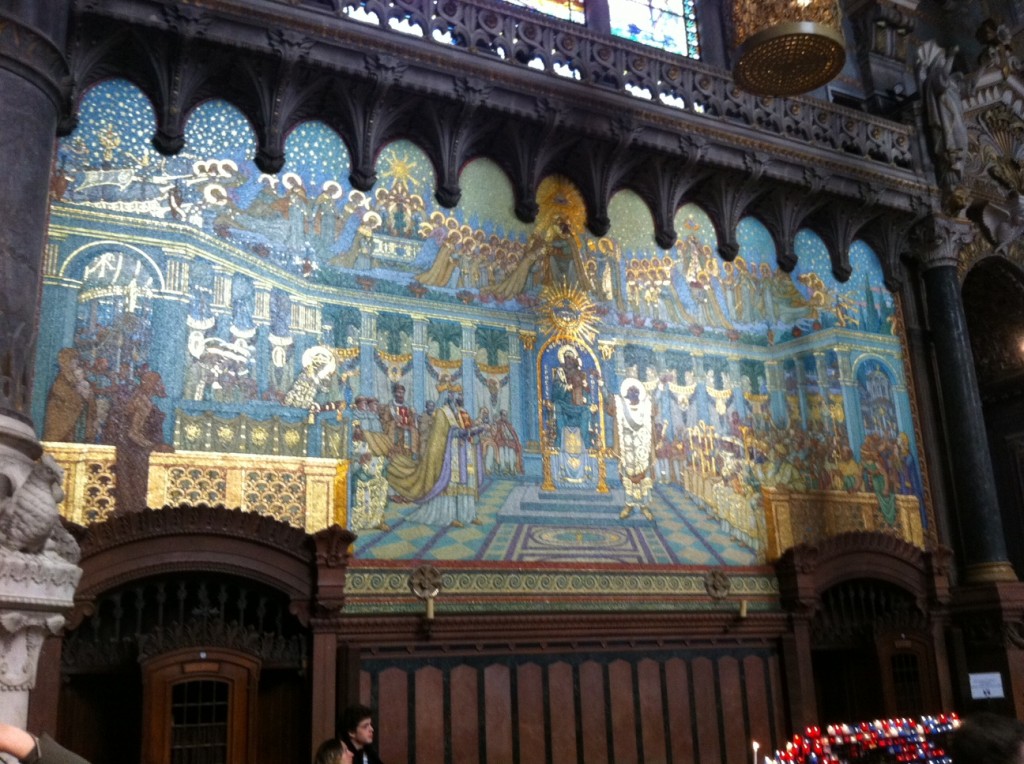 Views of Lyon and the distant Alps from the basilica are breathtaking. That round tower in the center is our hotel, the Radisson Blu. 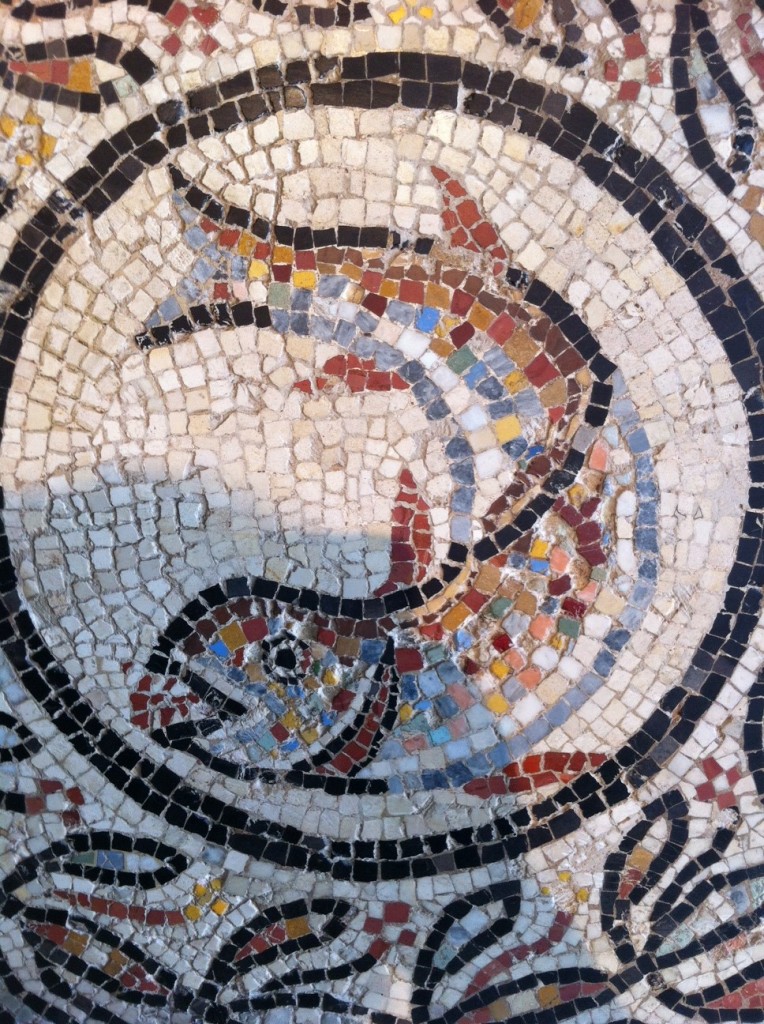 My companion enjoys fish art. Apparently the Romans did, too. The Gallo-Roman Museum displayed antiquities more than two millennia old, from the Roman city of Lugdunum, on the site of present-day Lyon.

The Roman faces captivated me most in the museum. This was Emperor Caracalla. 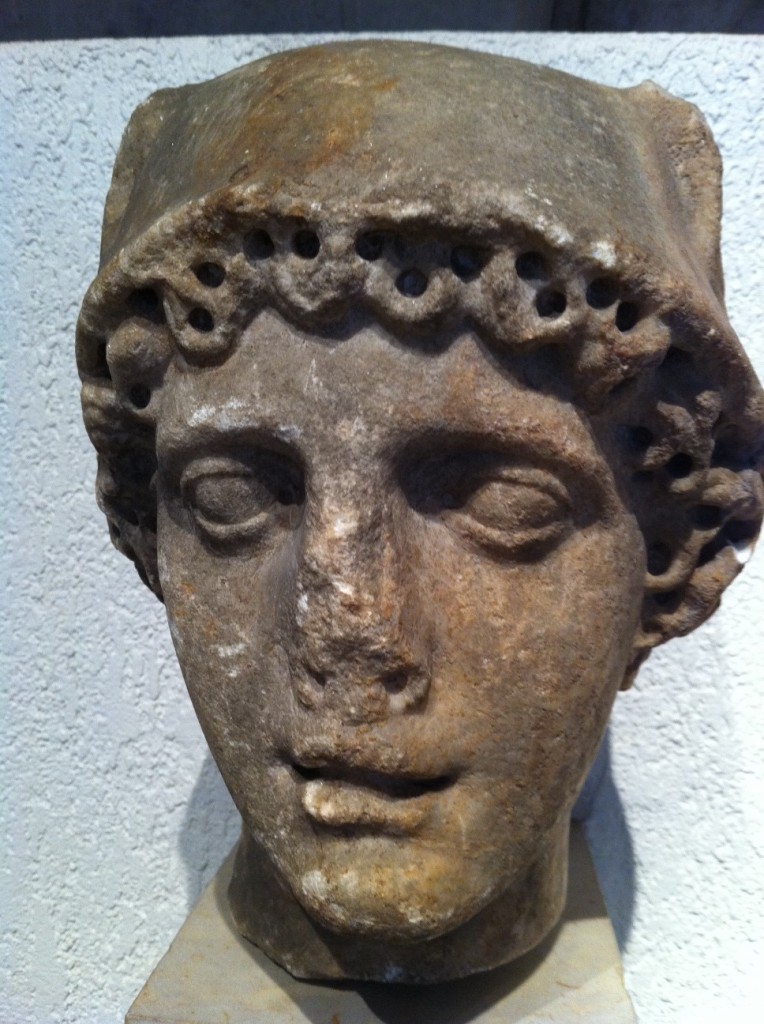 Roman gods (and planets, for that matter) are well represented in the museum’s faces. Here’s Mercury.

And, of course, Jupiter 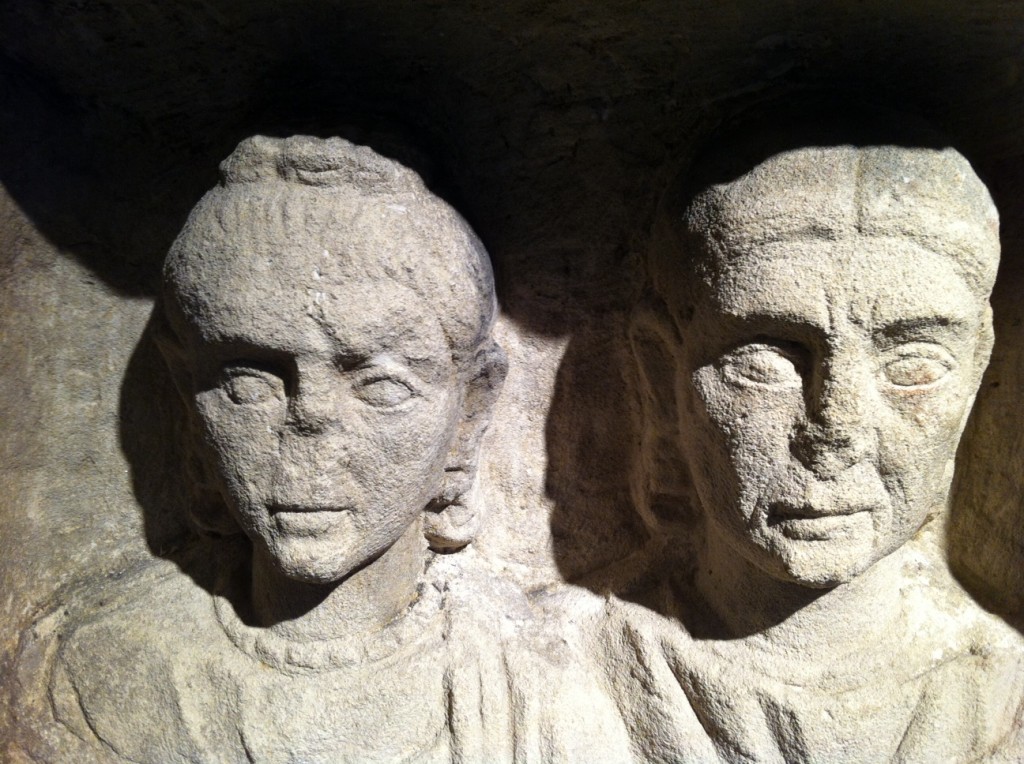 These were apparently a mother and daughter.

The Roman museum is built adjacent to the ruins of an amphitheatre. Some theatrical masks are among the artifacts that have been found.

Yeah, the masks are kinda creepy. 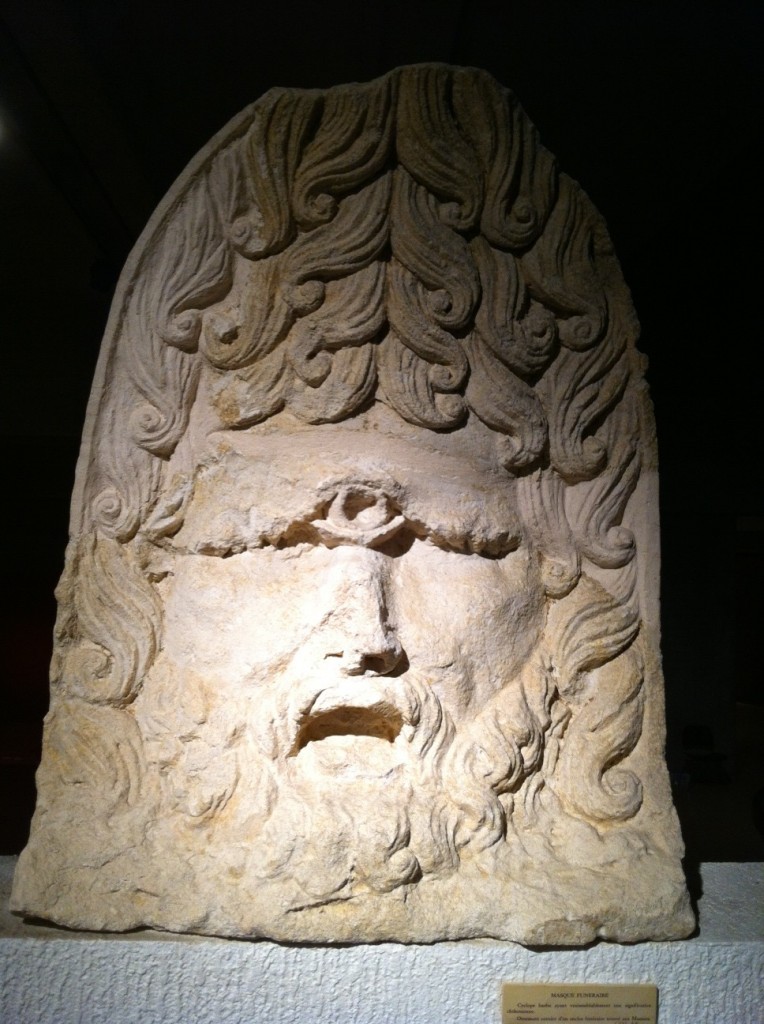 Even creepier were the funeral masks. This one’s a cyclops. 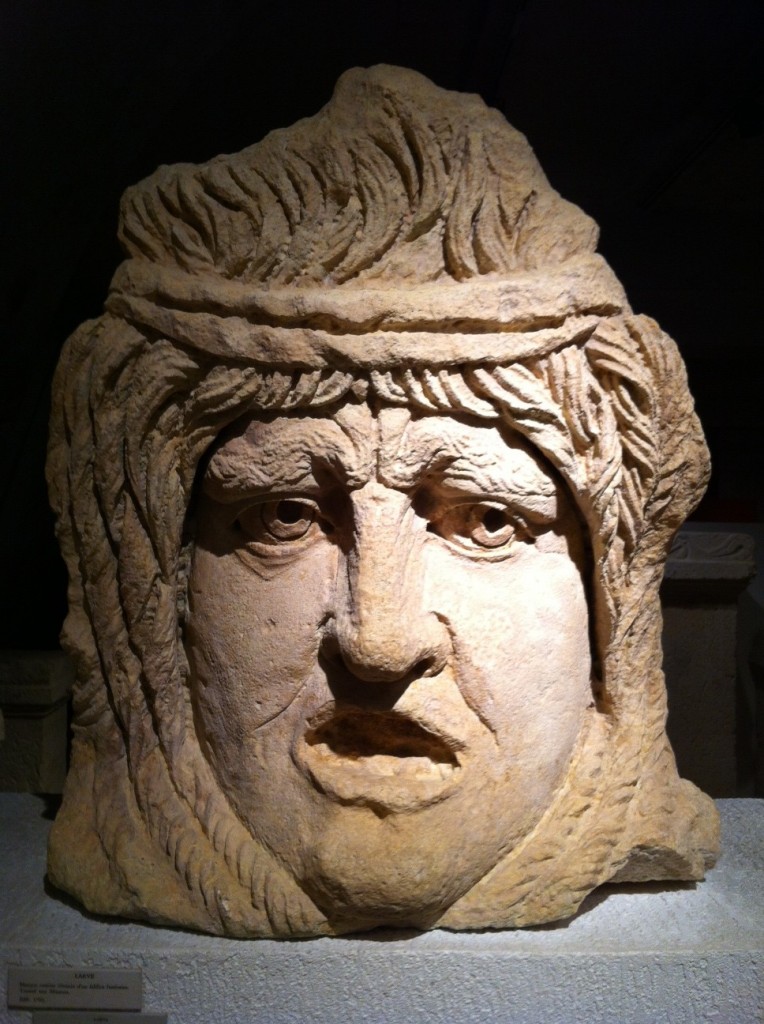 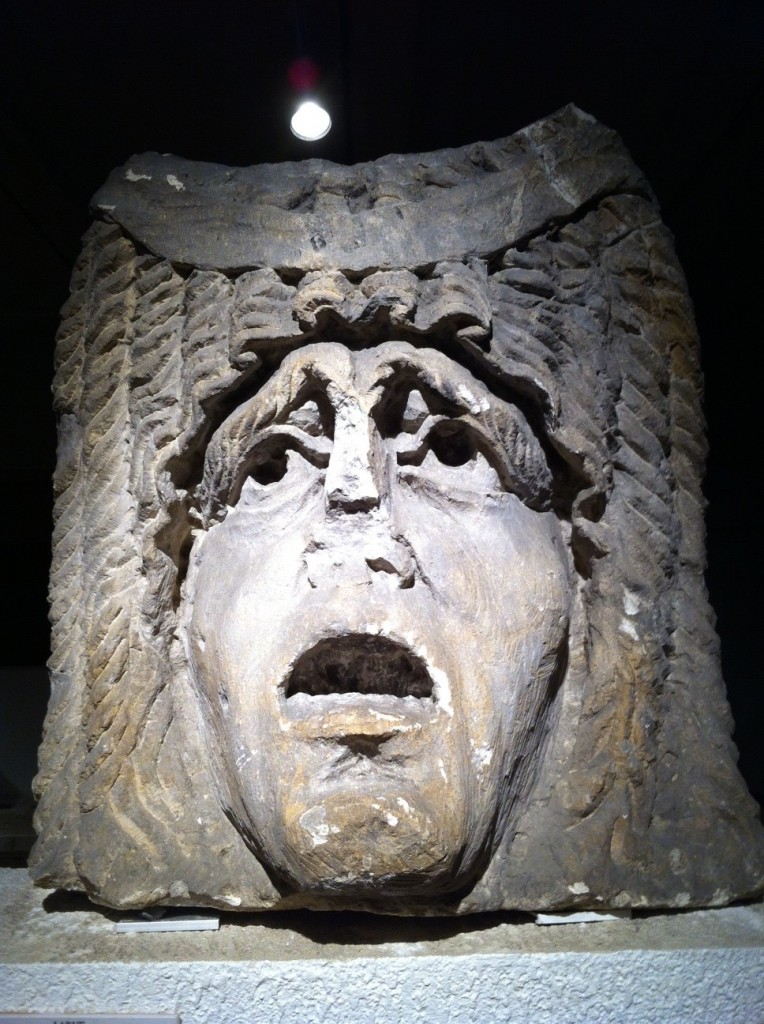 I told you they were creepy. 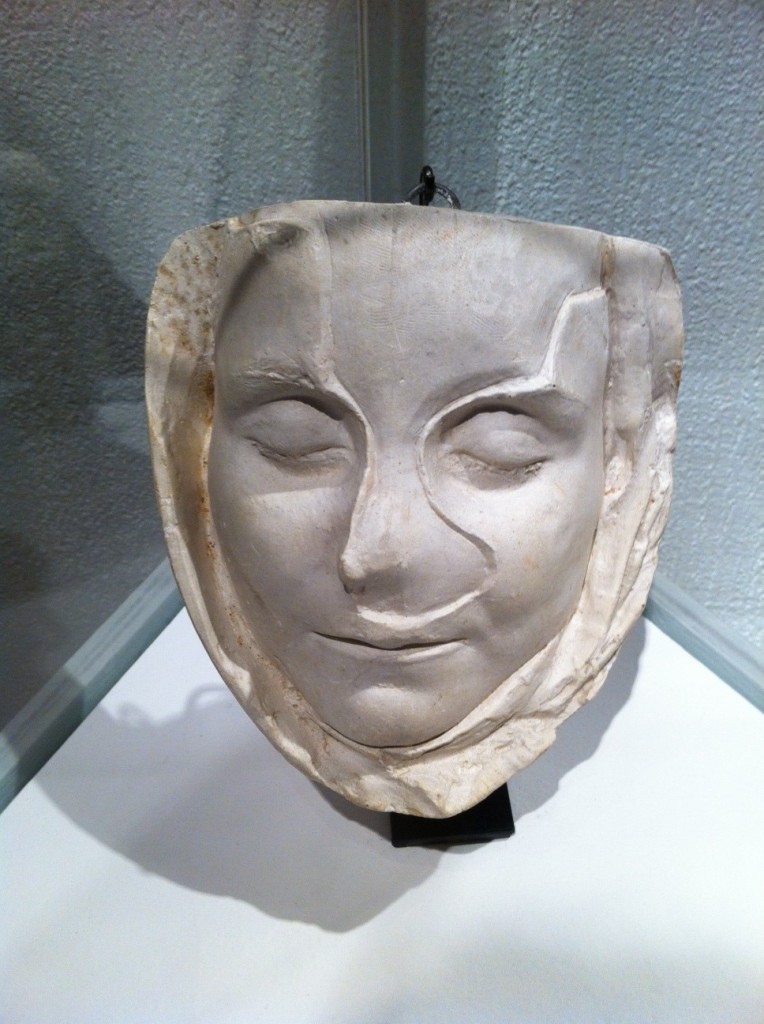 This mask is sad, apparently from the funeral of a young girl. 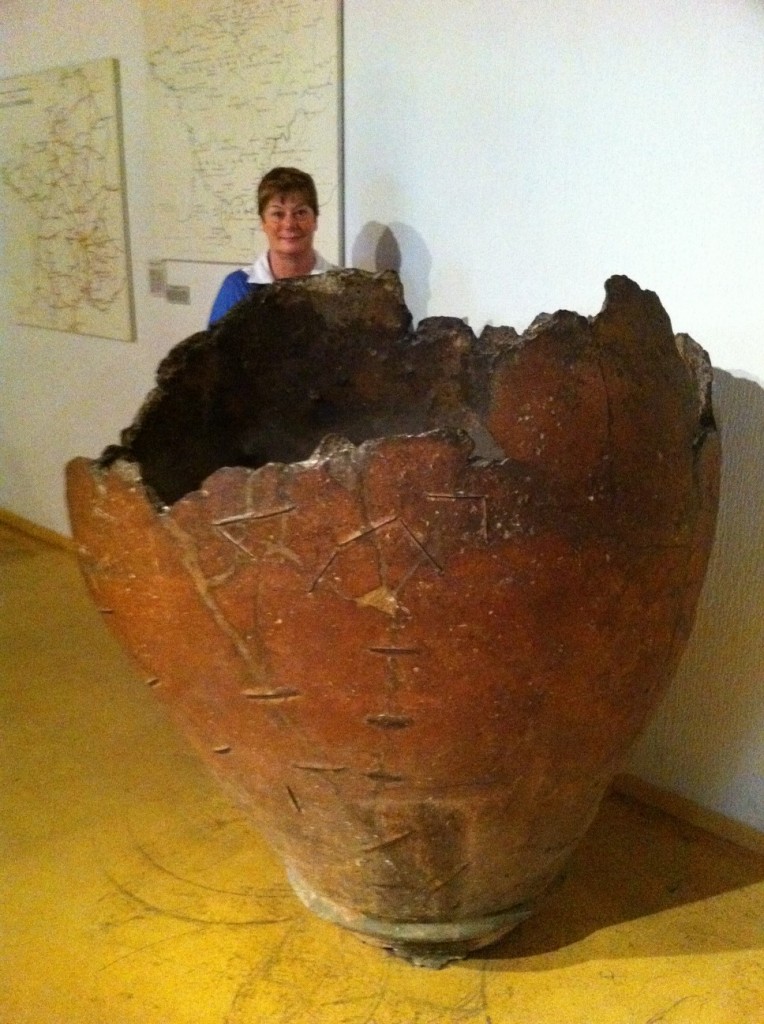 This container is huge. With walls that thin, could it have held water. If not water, what would you use an urn that large for? It had no plaque to explain.

I wonder if Red Rocks will hold up as well in 2,000 years as the Amphitheatre of the Three Gauls. With the view of the city and the mountains, it reminded me somewhat of Red Rocks, which we visited in October.

5 thoughts on “An ideal day in Lyon”