This is a guest post by Kim Bagby, Steve and Mimi’s daughter-in-law. At Mimi’s invitation, she and her husband, Joe, are sharing a “2 Roads Diverged” view of their on-going trip:

It’s been a hard year.

It’s been a hard year and I’m not a writer. I don’t know the first thing about telling a story people want to hear. I wish Steve was still here, he could probably give me a pointer or two. But if he was here, I suppose we wouldn’t be living in my car right now. I might be a bit ahead of myself already (the first of what I’m sure are to be numerous writing blunders).

Well ok, I’m definitely ahead of myself, but that’s how I roll. Fifteen steps ahead, hypervigilant, mapping out A, B, and C choices for each and every detail. Nevermind that we can’t finalize any details until we get to them, I’m still mapping out our options. I like love well-laid plans. Apologies for how that translates to my writing (or if you end up playing in any part of this journey).

I am (We are?) such a cliché. Mid to late thirties, so done with our jobs. I had taken a chance with a job outside of my industry in a position for which I seemed quite well suited. It turned out that the position was not well suited for me. It had been a year of struggle, preceded by three years of entertainment struggle that led me to search outside the industry in the first place. Steve’s precarious health situations had always been woven into our life together. He’d long since recovered from his first round of cancer when Joe and I met. The lymphoma diagnosis came, and Steve’s path through it was brutal. He made it, though. We barely had time to catch our breath and pancreatic cancer struck. Another good friend of mine had been living with pancreatic cancer. It hadn’t ever seemed like a walk in the park, but still. He’d been living. So maybe that’s partially why my ever-cynical outlook turned hopeful. That was always Steve, defiant in the face of looming threat. He seemed ok at Thanksgiving. Not great, definitely not robust, but ok.

An unassuming question became the theme for our next few months: now what? Joe had just quit his job to go full time with our own lighting company. I was the adult with health insurance and a regular paycheck, and I was miserable. We were about to leave on a trip; we had to make a decision within days.

I quit the week after Thanksgiving.

I went back to freelance trade show coordination. I committed to a massive show in the spring, a show big enough that we could pad the bank accounts and secure health care for the rest of the year. I would end up vested in my pension. All of the adult boxes were checked, which pleases me so, and like that (poof!) we were going to leave Las Vegas for Baton Rouge. We would help Joe’s mom and dad, we’d take the dogs and get an apartment. Joe could spend those last few invaluable months, weeks, days with his dad. Like I said, fifteen steps ahead with A, B, and C options. I’ve read Joe’s companion post to mine and – spoiler alert – his words are impolite yet precise: “Cancer does not give a shit about your plans.”

Before my show went onsite, Steve was gone. The speed both merciful and cruel, a devastating relief.

For at least the second time in three months, now what? Joe stayed in Baton Rouge to help sort the “things” of death. I was thrown into 14-16 hour days for weeks on end. We both emerged foggy. We’d quit our jobs (stupid?). We’d saved a bunch of money (smart!). We could take a few weeks, months, whatever without freelance work if we so chose (questionable?).

Joe was ready to go back to work. I was done. I needed to be away. We’ve spent our years in Las Vegas working unbelievable hours, multiple jobs, and creating our own company. The last year was rough in a new way and I’d reached a limit.

But again, now what? What a rare occurrence, to possess both free time and money saved (although both in finite amounts). We’re childfree, still 100% able to be irresponsible adults. We do have dogs. Those sweet, loving, irritating creatures cost a fortune to board, so they’d need to come along.

Looking at us, you might think Joe possesses more dirty-van-dwelling-hippie friends. WRONG! The results of a quick, unscientific count: Joe (0) Kim (at least 5). Not only was I aware that people willingly drove around the country living in their vans, I knew people that had done it (and 4 of those 5 people took their dogs!). But we, in the exact words of one dirty-van-dwelling-hippie friend, “are NOT van people.” If we tried it, it would be unlike any trip we’ve ever taken. I owned a vehicle that lent itself to the project (shout out to all those Honda Element owners – ugly but versatile!). It already had its own hashtag on Instagram, FFS. Let’s recreate that first conversation:

Kim: “You know, we could build a bed in my car and drive around the country for a month or so. The dogs could come.”

In his defense, the man is 6’4” and has a bad back. But something stuck. The next day, Joe had found a luxury van (he gets me) with kitchen, bathroom, king sized bed, the whole nine. DONE DEAL. Yeah, what is that saying about champagne van taste on a Honda Element budget? Further research proved RVs were cheaper…but neither of us were ready to commit to being 75-year-old retirees just yet (no judgement, just not ready for that step at 35). We researched, we ended up out of options. But somewhere along the line, Joe’s hard no became a soft yes. He started talking about #hotelement life more frequently, he seemed to settle into the idea. A few days later, an actual yes. I was, and continue to be, dumbfounded. I grabbed a calendar – we did have a few work commitments lined up, along with a group trip to New Orleans and two memorials for Steve. This left us one week to figure out how to do it – how to build it, what to pack in it, how to live in it, and where we were going.

So here we are, as I so frequently find myself – with an overall plan, back up plans A-B-C (more like A through M), unable to finalize any of the details until the last second. Still asking “Now what?” on the daily, along with the slight variation of “Now where?”, dragging you kind readers along with my mediocre (at best) blogging skills. I’ll at least try to include some pretty pictures ( https://www.instagram.com/2roadsdivergedblog ), and to park in as few of your driveways as possible. 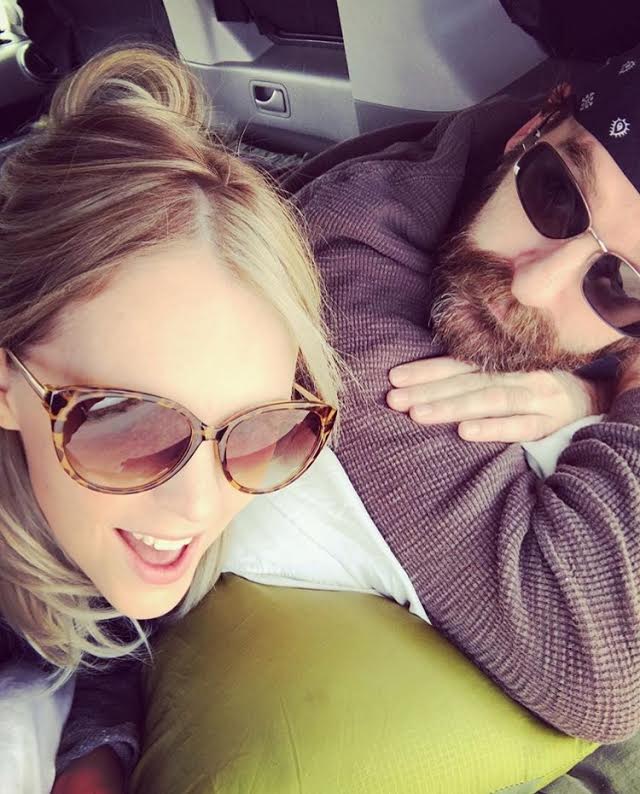