There is a feeling when you travel, that you must not waste time. Certainly, that can serve you well. There are sights in every city that shouldn’t be missed. But then again, sometimes we miss the flavor, the tenor, the actual heart of a city because all we see are the sights.

I’ve been lucky while in Lyon, France. We’ve put off most of our sight-seeing until my companion is finished with the three day conference he was invited to attend here. That has left me on my own to wander, not bothering with the main tourist attractions, knowing that we’ll get to them on the weekend. I’ve enjoyed just taking in the city.

My first morning here it took me nearly until noon to get myself together and shake off the jet lag. That’s much too late to watch the city’s top chefs making their purchases at Les Halles de Lyon, an indoor market of gourmet food shops. But Les Halles is easy walking distance from our hotel, so I strolled over anyway. I’m so glad I did.

Enticing offerings at the charcuterie

The place was bustling. Customers shopped with purpose, filling the large shopping bags on their arms with the best of the best. Unobtrusively as possible, I stalked one humpbacked dowager as she made her way from stall to stall, gathering ingredients. She picked new spring peas at green grocer and fresh tagliatelle from the homemade pasta booth. After a stern debate at the charcuterie, she added a lovely, thick slice of pancetta to her bag. I left her picking through bottles at the wine booth, jabbering at the seller, no doubt haggling for a good price.  Assuming she had eggs and lots of pepper at home already, my mouth watered at the thought of the carbonara she’d soon make.

Not surprisingly, I suddenly realized I was hungry. But ordering food in a country where you know nothing more than bonjour and merci can be tricky. Surrounded on every side by wonderful gourmet food, I had no idea how to ask for any of it. Grunting and pointing seemed so crass. A kiosk with posted pictures of sandwiches and salads was crowded with lunchtime business, and again I lurked off to the side, observing. The sandwiches looked marvelous, and every single diner had a small glass of wine by their plates. 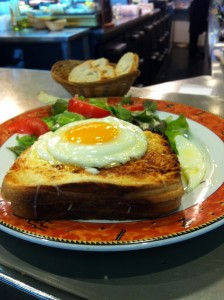 At last a barstool opened up, and I shyly snuck onto it, noticing as I did that the young man next to me had just been served what appeared to be a grilled cheese sandwich with a fried egg on top. When the very busy clerk stopped in front of me with a “Bonjour,” I pointed to the young man’s plate and said in English, “I’ll have that, please.” The clerk smiled with a, “Oui,” and bustled off. The young man turned to me and said in English, “It’s called “croque madam,” you know, because of the egg. It’s very good here.” We went on to have a pleasant conversation, him telling me the things I should be sure to see in Lyon, and asking if I’d seen the White House when I told him I was from the Washington, D.C. area.

When my food arrived it was even better than I anticipated. The wonderfully textured French bread was charred just enough along the grill marks to give a twinge of bitterness, pleasantly offsetting the rich egg and what could only be a Raclette cheese filling. Twice the waiter stopped, pointing to my plate and raising his shoulders in gallic question. I would nod, and say, “It’s very good.” He’d nod back. The third time he paused, I looked over at my dining companion, unsure how to reassure the waiter I really was pleased with my meal. They exchanged a few words, and then the young man leaned in to whisper, “He’s hoping you’ll say it’s awesome.” Turning to the waiter, I said in my best Midwestern twang, “This is just awesome.” The waiter grinned and pumped his fist in the air. We all had a good laugh and he brought me a small strawberry tart on the house.

Before I left on this trip, a young friend told me if all I did was sit in sidewalk cafes, sipping wine and watching people, it would be time well spent. He is wise beyond his years. Yesterday, I did just that, and found the people of Lyon friendly, happy, well-dressed and deliciously fed.