My companion was in involved with the Pennsylvania Press Conference until mid-afternoon. But after a rainy night, the morning was crisp, clear and too perfect to sit around the hotel waiting for him to join me.

I got to the downtown square with plenty of time to explore the Farmer’s Market after a nice breakfast a the Ragged Edge Coffee shop. It’s always fun to check out the booths, but since we were traveling I didn’t pick up any of the luscious-looking strawberries or crisp, bright greens, tempting though they were. I also enjoyed walking around the downtown streets.

There is something of a tourist-trap element in Gettysburg. There are lots of t-shirt shops and it’s true that you could eat your weight in ice cream and fudge. But the history is still there. Pick any random street and walk down it. You’ll find plaques in front of the buildings that stood at the time of the battle, and sometimes a story to go along with it. I stopped in at the a shop called the Union Drummer Boy, where you can buy any number of Civil War artifacts, from mini balls to muskets, something that seems to me both a little sad, and a little ghoulish. It gave me pause, looking at tree trunks embedded with cannon balls, and chunks of wood peppered with lead shot, at the courage or foolishness of the men who rushed head-long into them.

Before I left downtown, I toured the David Wills House, where President Lincoln spent the night before, and put the final touches to, his Gettysburg address. As a writer, I was amused by one of the videos, which told that Lincoln’s words received mixed reviews. One newspaper declared it, “vulgar jargon,” another twisted Lincoln words, saying we did not need a “new birth of freedom, but a new president.” But one scribe got it right, declaring it a “brief but immortal speech.” (The video didn’t credit which newspapers gave those opinions.) As a kid, I memorized the Gettysburg Address, and the words came back to me as they were recited on the video. It is a masterful piece of writing, and it never fails to move me.

That afternoon I joined my companion along with a group from the conference for a tour of the battlefield. Our guide, Richard Goedkoop, was friendly and superbly knowledgable, and he wove in newspaper accounts of the fight as we made our way from site to site.

Military stragedy is lost on me. I don’t even play chess well, let alone grasp the fine points topography advantage and artillery power. But even I could see the strategic advantage of Cemetery Hill and Little Round Top. When we reached the end of the tour, and story of the Pickett’s Charge, we looked across the open field from the Union side, toward the Viriginia Monument. That’s where the Confederate troops massed, where they launched their last attempt to break the Union forces. Richard read newspaper war correspondents’ accounts of that third day of battle.

Gettysburg is a busy place. There are lots of tourists. We heard some laughter, people calling to each other, yelling kids, a barking dog or two, and even a repeating honking horn from someone’s mistaken thumb on the panic button of a car remote. But when Richard stopped reading, it suddenly became very quiet. Looking across that open, sunny field, it seem to me a faint vibration rose, a lingering energy of violence and horror. So many men died there. It was the battle that broke the back of the Confederacy.

What drives soldiers in moments like that to pick up their weapons and rush head-long into the cannon’s mouth? Patriotisim to their country? Loyalty to their commrades? Did any of them wonder how they got there? Were any of them apalled at the volume of death and destruction? Did they know, as they fought so ruthlessly, that the tragedy they were creating would hang like wisps in the air to this very day?

It’s a train of thought that haunted me into the next day, when my companion and I decided to visit Antitam as well. 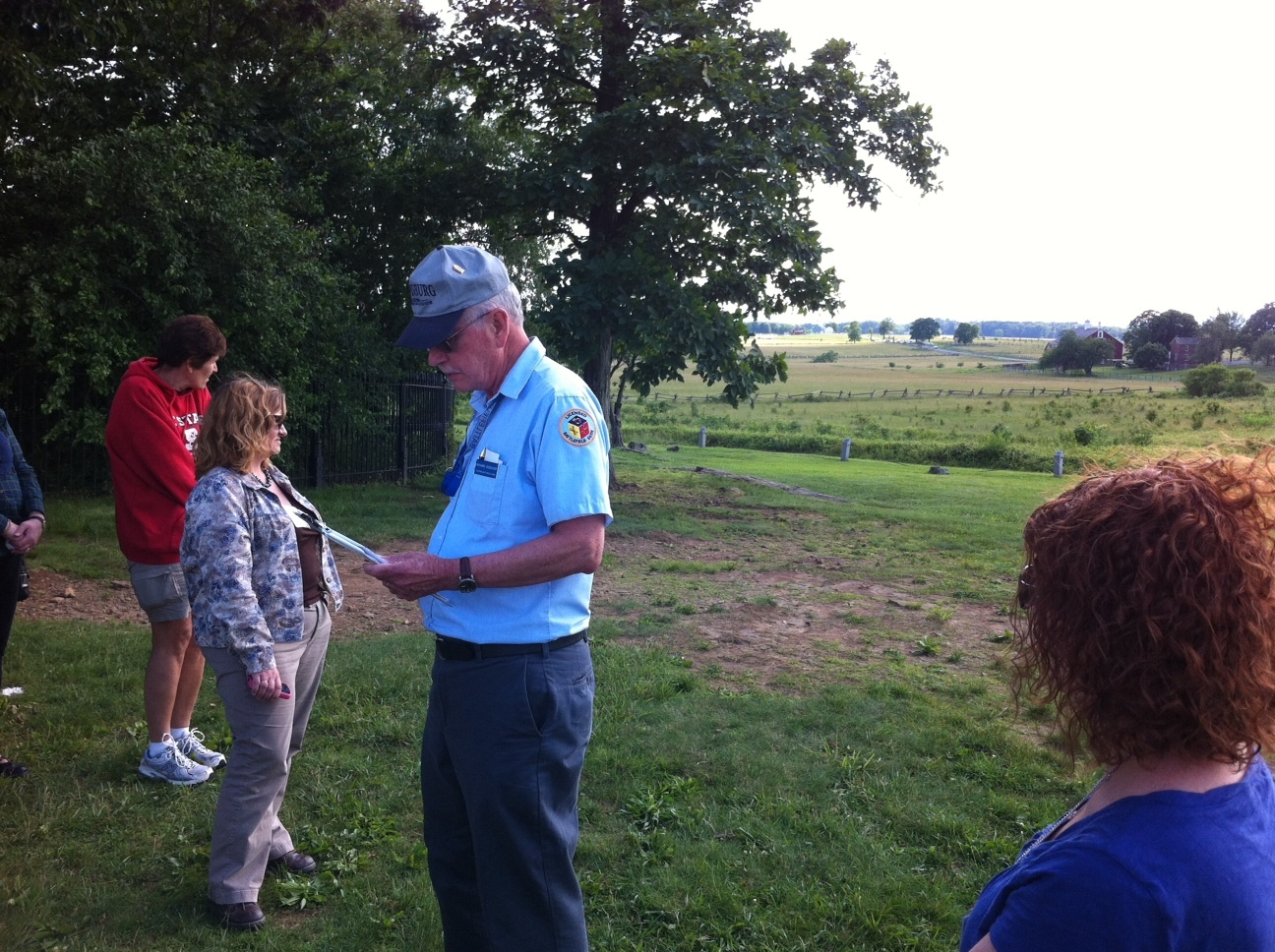 With the battlefield behind him, guide Richard Goedkoop reads press accounts of Pickett's Charge.