This is why Little Round Top was important: You can see the whole Gettysburg battlefield from there.

I wonder how many different tours of the Gettysburg National Battlefield you can take before it starts getting old.

I took a bus tour with the Pennsylvania Press Conference Saturday, my fifth tour, and heard a perspective I hadn’t heard before. Richard Goedkoop, our guide, covered lots of battlefield history I had heard before. But he provided a different twist, tailored to the group of journalists he was leading.

More on Goedkoop’s tour shortly. But first, I’ll review the other ways I’ve toured the battlefield.

First, about a decade ago, I met my oldest son, Mike, at the historic battlefield. I had an extra day on a business trip to Philadelphia, and Mike was living in Washington. Like the Union and Confederate armies (only moving much faster), we converged on Gettysburg. We paid for a bus tour, led by one of the many licensed battlefield guides (whose name I’ve long forgotten).

The 91st Pennsylvania Infantry monument at Little Round Top

It was a fascinating tour and our guide was, as you’d expect, a military history buff. His particular interest was firearms and munitions. He showed off various types of bullets during the tour and gave great detail about the cannons we drove past. I left wanting to return and learn more.

A few years later, I moved to Washington and one of my first assignments at the American Press Institute was to lead a seminar that included a tour of Gettysburg. It was a leadership seminar and my boss, Drew Davis, a two-star general in the Marine Reserve, would present a session on leadership lessons from the battle the evening before our tour.

This was a staple of API leadership seminars during Drew’s tenure, and he liked to have some colleagues from the Marine Corps University lead the tour of the battlefield the next day, building on the lessons Drew had outlined the evening before. Unfortunately, Drew’s colleagues were not available. I can’t recall where I got this recommendation, but I lined up Carol Reardon*, a history professor from Penn State University, to lead the tour.

While I looked forward to the battlefield tour, my focus was primarily on making sure the seminar worked well. It was my first API seminar, and I was a little nervous, and not yet experienced at handling all the details. I had heard praise before for the Gettysburg tours led by the marines, and I was hoping this one would measure up. I was confident in Carol’s expertise about the battle. She had, after all, literally written the book on Pickett’s Charge.

As thoroughly as I planned the day’s events, one thing I couldn’t control: the weather. A light drizzle was falling all day, not enough to cancel our plans, but enough to be unpleasant. I had a pretty high level of anxiety when we reached the battlefield.

My Dad's people were from Tennessee. I may have some kinfolk memorialized here.

Then I fell under the spell of Carol Reardon. She was as captivating a storyteller as I have ever heard. She had different leadership lessons at every battlefield stop and on the bus ride between stops. She not only underscored Drew’s lessons (without attending his session the evening before), but added new lessons. She had insightful answers to every question  asked. She filled us in on the strategy, tactics, topography, technology, personalities, weather, geography, politics and lore of the battle. She debunked legends and told us how press coverage from Richmond newspapers depicted Pickett’s Charge as a valiant effort, rather than a humiliating defeat.

API groups usually literally walked the mile across the battlefield, tracing Pickett’s charge and understanding how the terrain affected the course of the battle. With the field wet and the drizzle picking up to a light rain, we didn’t walk the field, but Carol’s explanations from the Confederate lines where the charge started and the High Water Mark of the Confederacy, where it ended, were like living the experience.

API asked seminar participants to rate sessions on a form at the end of a seminar. As I recall, we used a kind of odd 1-to-7 scale, rather than using 5 or 10 as the top score. Whatever was our top score, it wasn’t enough for some participants. More than one gave Carol an 8 (or whatever the top score + 1 would be) and everyone else gave her the top score, so her average was actually higher than the top of the scale. Even in the rain.

I was studying how you measure the effectiveness of training, and wanted to know more than how much people enjoyed a seminar, which you get in those rating sheets on the last day. I wanted to know how a seminar impacted their work. So I followed up three months later with the seminar participants, asking questions about how they were applying what we had taught during the seminar. Again, Carol blew the field away. That was not just a fascinating day of history and battlefield lore. She actually changed how people led their colleagues on their newsrooms and ad staffs.

I knew no battlefield guide would ever match Carol Reardon, but I had to come back. I had visited the battlefield twice without my usual traveling companion, and she was getting restless to see it herself. So we drove up to Gettysburg later that year. This time, we paid a licensed guide to give us a personal tour, driving our car around the battlefield and answering all our questions. With Carol, we had a schedule to keep and we left each stop wanting more. This tour was more leisurely and personal. Our guide answered our questions at length. And the weather was beautiful.

We not only toured the battlefield but visited the national cemetery that Abraham Lincoln dedicated with our nation’s most famous speech.

My fourth battlefield tour was with my mother, a history buff who was in her late 70s by the time she made it to Gettysburg. She preferred touring by ourselves at our own pace, so we took the CD tour, driving the battlefield ourselves and listening to a CD that gave us driving directions and provided the historical overview (with some cheesy battlefield sound effects, as I recall) at each stop. With the other tours fresh in my mind, I provided second-hand tales from Carol Reardon and the other guides. It was my least satisfying tour in terms of battlefield appreciation, but still interesting and enjoyable. And it was a special time with Mom, whose memory was fading. I’m pretty sure it was the last time I’ve taken Mom somewhere other than church or a family event, and she was still able to enjoy the outing.

I don’t know at what point this battlefield starts getting old, but for me, it wasn’t the fifth trip, this past weekend, again with my usual traveling companion (who’s also blogging her account of the tour). Goedkoop’s narrative of the three-day battle was quite familiar. I had heard (but not necessarily remembered) the stories he told of tactical maneuvers by Lee, Meade, Longstreet, Sickles, Vincent and the other military leaders.

But Goedkoop sprinkled his presentation with passages from press accounts filed from the field. He explained the difficulties the 45 journalists had filing from the field, with the armies alternately cutting and restoring telegraph lines. At one point, he said, a reporter took over a telegraph office, barring other journalists from sending out their dispatches. Reardon had talked at length about press coverage of Pickett’s Charge, but it was fun to hear Goedkoop read the actual stories from Northern and Southern newspapers.

This tour had the added benefit of Marc Charisse‘s passion and expertise. Marc is a colleague, editor of The Evening Sun in nearby Hanover (site of a lesser-known battle). He’s a Civil War buff who’s toured many battlefields and actually was married on Little Round Top, the hill that played a decisive role on the third day of the Battle of Gettysburg. Marc shared his expertise by live-tweeting our tour. I’ll curate his tweets and mine from this tour in a separate post.

I haven’t had my fill of Gettysburg yet. I saw a group touring on horseback and thought that might be an interesting way to tour the battlefield. Not sure I’ll be trying the Segway tour, though. I’ve heard too much about that uneven terrain.

Whoever your guide, however you tour, Gettysburg is a special place. When I visit the site of our nation’s most horrific battle, I gain an appreciation for peace. I gain a deeper understanding of the madness of war, at the same time in awe of the valor of those who fight in wars. As Lincoln said in dedicating the cemetery, we “can never forget what they did here.” Each time I tour this hallowed ground, I marvel at the courage — and the waste — of those men who gave that “last full measure of devotion” here.

Coming soon: My companion and I also visited the Antietam National Battlefield on our way home from Gettysburg. We’ll be blogging soon about that battlefield

Final note: We also visited the Eisenhower farm in Gettysburg. You can read my companion’s and my accounts of the Ike visit in separate posts.

* To clarify for people who know the wonderful Carol Ann Riordan, who was API’s most valuable and popular leader for 25-plus years, she and the history prof Carol Reardon had never met. Their names are pronounced the same but obviously spelled differently. The names did produce some fun and confusion that week. 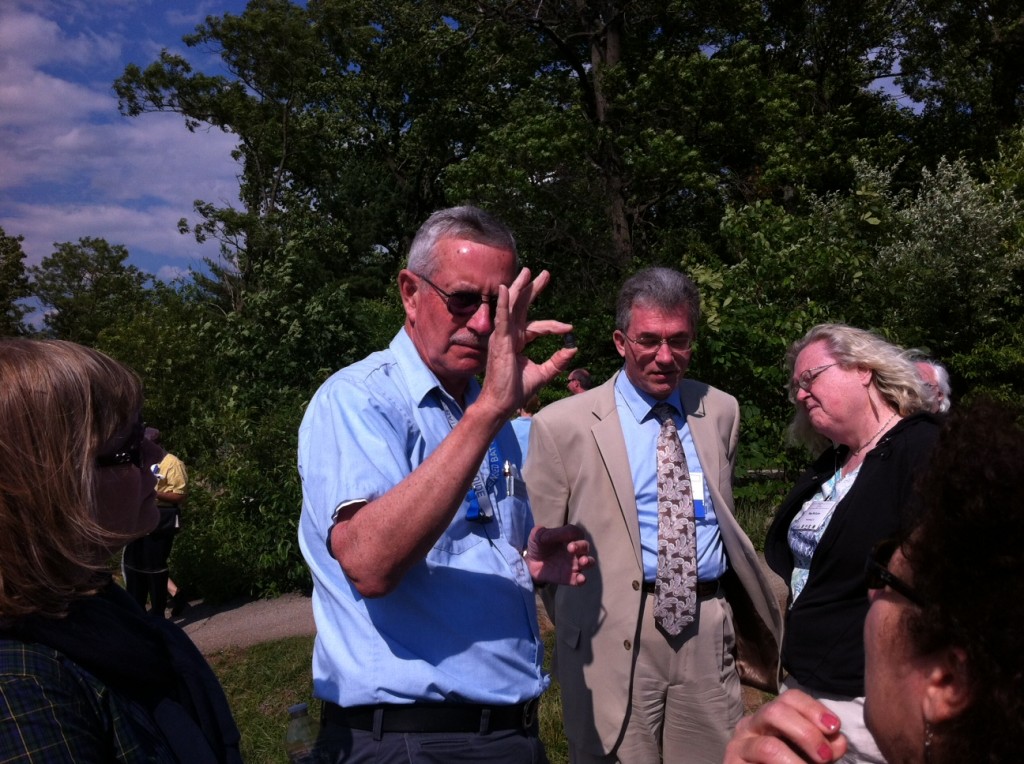 At Little Round Top, our guide, Richard Goedkoop, shows us a bullet.

Update: Thanks to Robbie Thompson for suggesting this video:

4 thoughts on “Gettysburg: We can’t forget what they did here”