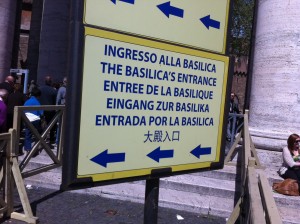 Few experiences are as humbling for me as traveling in countries where English is not the native language.

Maybe that’s part of why I like travel. We all need to be humbled now and then.

I excelled in German when I was in ninth grade. But we moved to a different school district, where they dropped German from the curriculum during World War I “to be patriotic.” And a quarter century after World War II, they still weren’t teaching it.

I tried a week or two of Latin (it fit into my schedule of other classes, or I never would have wasted even a week or two on a dead language) before bailing out and continuing German by correspondence course. Don’t ever take a language by correspondence; you need to converse in the classroom. I needed two years of a foreign language to get admitted to many colleges back then (I hope you still do) and it took me three years to finish the second year of German.

I also needed two years of foreign language for my bachelor of arts at Texas Christian University. I decided I’d never recapture whatever spark I had for German, so I started fresh with Spanish. Again I excelled my freshman year. When I was a sophomore, I was pretty heavily involved in the campus newspaper and less interested in my classes. My Spanish A’s slipped to B’s, but I did finish in a year. And forgot most of what I had learned by the time I was a senior.

On a trip to Venezuela as a journalist a quarter century later, I needed interpreters (though I had an interesting morning without them). Later visits to Mexico, Germany, Japan, Ecuador and Saudi Arabia were aided by hosts, guides and shopkeepers who were fluent in English or at least competent.

When I traveled to Siberia in 2009, outstanding interpreters helped me understand the programs, a host fluent in English took us on a walking tour of Barnaul and she lined up a friend to do the same in St. Petersburg.

I bought a Russian-language app before that trip, intending to learn a bit of the language. But my ability to retain language is nearly gone. When I used the app, which wasn’t much, it was as a spokesman, not a teacher. I’d play a phrase and hold it up so the Russian person could understand what I wanted to say (and, no doubt, chuckle later about the bumbling visitor).

On this trip, I am equally incompetent in French, German and Italian. In Switzerland, I encountered people who are fluent in all those, plus English (and who knows what else?).

Train stations are like a song from “Cabaret”: Willkommen, Bienvenue, Welcome.

When I was a child, the Air Force stationed my father in Japan. I learned a little tourist Japanese (How much does this cost? Ikura desu ka? Where is the train station? Eki wa doko desu ka?) I remember some embarrassment when Dad would speak louder to Japanese people who didn’t understand him, as if the problem was their hearing. Well, I have become Dad. I (usually) restrain the urge to speak louder and try to remind myself first to ask whether a hotel or shop clerk speaks English before I launch into an English question (most have, so far). But more than once, I have caught myself plunging forward in English and raising my volume if the person didn’t understand. As with Dad, it usually works – not that the person I am addressing can suddenly hear and understand, but that I am loud enough that someone who speaks English hears and rushes over to save a colleague from the Ugly American.

A cab driver in Lyon cajoled me, saying when in France I should work on my French. Oui, I said. Then he told proceeded to boast in English of France’s culinary championships (the United States finished 11th in the most recent cooking “World Cup,” as he described it, and showed us on his cell phone as he drove). He dropped my traveling companion and me off at a silk shop where the clerk spoke excellent, and charmingly accented, English, so I never had – er, got – to work on my French.

My traveling companion shares my lack of linguistic fluency. But unless we’re in a silk shop – where I am inarticulate in all languages – she often lets me do the talking – and the struggling.

As with our 2007 visit to Germany, tiny flashes of German dribbled back into my mind from the 1960s, more on my second day in Switzerland than the first.

On a train, I explained to my traveling companion what several stories in the newspaper were about, aided as much by photos and recognizable words as by my German skills (did you know German for Justin Bieber is Justin Bieber?).

At a gelato shop in Luzern, I confidently placed my order in German (it helped that caramel apparently is German for Karamell). I had seen that my purchase would be fünf francs, so I had a 5-franc coin ready, with another franc in case I needed sales tax. The clerk cut me to the quick by telling me, “five,” and I tossed her the big coin and went off to salve my humility with caramel gelato (a rather good salve, as it turns out).

As we changed trains in Milano, the display boards in the station showed no train bound for Florence, where we would be spending the night. A timetable showed that the train to Solano would stop in Firenze – Florence – so we headed to Track 15. Just to be sure, I showed my ticket to a woman in uniform who was helping other passengers. Pointing to the train, I asked “Firenze?” “Yes,” she answered. Maybe it was the fact that I pointed rather than making a sentence. Maybe it was the “NY” logo on the front my Mickey Mantle t-shirt. Maybe I mispronounced Firenze. But dammit, I could have understood Sì!

Americans should teach our children foreign languages in preschool and elementary school, (I’m glad my 3-year-old granddaughter Julia is already taking Spanish). We should be fluent in multiple languages by high school – even the languages of old enemies, for conversation is the path to peace. And we should travel (and interact with visitors and immigrants in our own country) enough that our language skills never grow rusty.

2 thoughts on “I am most fluent in helplessness”