My grandmother told me once that when she learned about the Civil War in school, the teacher told her that the blood and the horror suffered was God’s punishment because the Founding Fathers allowed slavery to continue when the United States was formed. But I don’t think we can pin the wickedness of slavery and its horrific end on God. The blame rests squarely on humanity, and our infinite ability to be inhuman.

I’d been to Antietam once before. When we arrived at the visitors center, I was aware of a vague, uneasy feeling when we paid our admission and rented a tour CD to play in the car as we drove around to each battle stop. Going down the road, the feeling blossomed to a near panic with ringing ears and sweaty palms. By the time we reached Bloody Lane, I couldn’t get out of the car. Babbling, I tried to explain to my companion what was going on, repeatedly asking, “Don’t you feel that? Don’t you feel some kind of weird vibration?”

No, he didn’t feel it. He was concerned. He was sympathetic. He obviously thought I was crazy.

I’ve wondered ever since if my reaction (or over-reaction, if you prefer) was merely the power of suggestion. I knew Antietam was the single most bloody day of the Civil War. I’d seen the pictures of men’s bodies, piled up like cords of wood. And I knew the claims that ghosts walk there by night. So, when we ended up touring at Gettysburg this weekend, it was my idea that we return to Antietam. I was curious to see if it would happen again.

Gettysburg and Antietam are very different. The battlefields around Gettysburg are not far from the town. The nearby highways are busy. There are more people, more noise. There was only one, brief moment when I could feel a vague rumble of vibration reaching out from the past. (See my post on Gettysburg.)

By contrast, Antietam is quiet – so very quiet. At several of the stops, my companion and I were quite alone. Just me and him, and yes, that strange, deep vibration that raised the hair on the back of my neck and he still couldn’t feel.

There was no panic this time. I expected that I would feel odd while we were there, and this time I was able to get out of the car, read the signs at every stop, and try to understand what happened over those broad, rolling acres. It was a beautiful day, sunny and warm, with a strong breeze and bright blue sky. But I couldn’t pretend I wasn’t uncomfortable.

I’m not claiming that I saw any ghosts. All I saw was beautiful countryside. But I do wonder if the energy of that hideous struggle, if the thick aura of violence, still hasn’t quite dissipated after all these years. The valor, the waste, the dauntless courage and the craven depravity – surely they must have left their mark. When I stood down in Bloody Lane, looking up the ravine, knowing the Union soldiers assaulted it over and over, and how desperately the Confederate soldiers held their ground, the vibration seemed nearly to hum with the lingering power of the fight. My ears strained, I was so certain I could catch the sound of it. But no, it was perfectly quiet. There wasn’t even any sound from the birds.

Lee’s army finally withdrew from Antietam Creek, a technical victory for the North, although they actually fought to a draw that day. I tend to think those mighty generals knew that death was the only winner on those bloody fields. It rained down on them, indiscriminate of the colors of their faces or their uniforms. Each one of those men had a life. They had babies to make, or families to raise, parents to see to, or grandchildren to hold. Instead they fell down and died, painfully and horribly and by the thousands. Thousands. The word seemed to echo up the lane.

I found myself thinking of a popular song by Kevin Costner and Modern West called The Angels Came Down. In it, when Costner sings that the angels carry the soldiers’ souls away, one line is: “They left no one and they placed no blame.”

The souls of the men who died there are mercifully gone. God made those rolling hills. It was the hatefulness of man that profaned them. That’s the tragedy that throbs through that beautiful countryside. And that’s what haunts me. 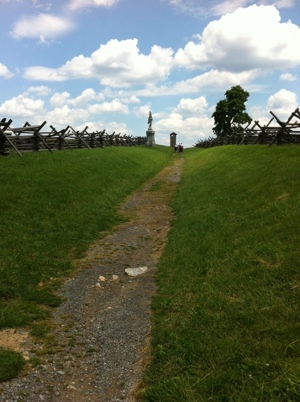