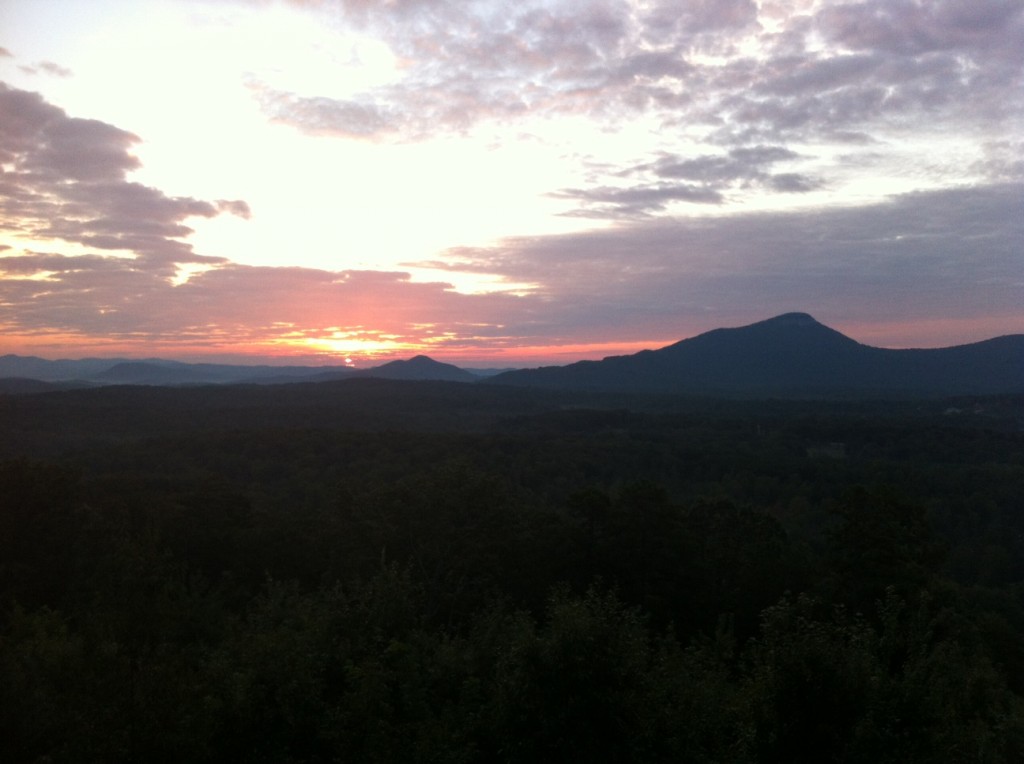 I have lived in more than a dozen places around the country and abroad, none of them in the Appalachians. But each time I visit these mountains, especially in the South, I know I am getting close to my roots.

My father’s people came from the mountains of eastern Tennessee. The mountains around the Chattahoochee River in northwest Georgia are some 200 miles to the south, but somehow this feels like our family belongs here. And indeed we are here for a Buttry clan celebration, the wedding of my nephew, Jon Buttry, to the love of his life, Jamie Mayo. Dad was a country boy who grew up in Chenoa, Ill., but we knew the “can’t hardly” that occasionally snuck into his speech was a reminder of his family’s backwoods roots in Sneedville, Tenn. He went off to seminary in Chicago, got a master’s degree and saw the world as an Air Force chaplain. But he always was a country boy at heart.

Perhaps in the same way that my son Mike loved the Dukes of Hazzard when he was growing up in a Midwestern city, I feel drawn to these mountains I have only visited. (We did see signs for Dukes Creek on our drives this weekend, and would not have been surprised to see Bo and Luke — that was Dad’s name — shoot past us in the General Lee.) 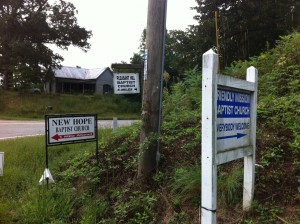 Dad was a minister of the American Baptist Churches (formerly known as the Northern Baptists). Just like I know I am a distant cousin to Buttrys scattered across the Appalachians, Dad’s Baptist churches were distant cousins to the Baptist churches that seem as plentiful as pine trees on these back roads (though I believe they pronounce it “babdiss” here). I may not have any roots here in the red Georgia clay, but on some level these mountains were the perfect setting for a Buttry family celebration.

It is the season for weddings in our families. The first two weddings were on consecutive weekends in Southern settings that could not have been more different.

Wedding number one last weekend took us to Jacksonville, Fla. My traveling companion’s sister and her husband hosted family and friends for the wedding of their daughter, Liz McNamara, and her new husband, Johnny Wells II. Jacksonville is definitely a city of the new South, a sprawling metropolis of true Southerners, Yankee transplants and military from everywhere. With all of Mimi’s siblings and their spouses gathered, and several nieces, plus a husband from last year’s wedding and a fiancé from next year’s, and the bride’s sister and her family, we spent way more time enjoying family than soaking in whatever Jacksonville offers. Other than a couple walks on the beach and the glorious view of the ocean out our window, we could have been enjoying almost anywhere my companion’s family gathered. 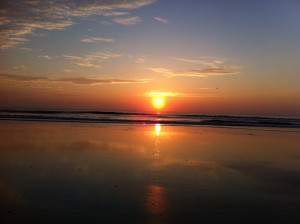 My companion is more drawn to the ocean than to the mountains. I am the early riser in our family, and I loved my morning walks on the beach as the sun first poked above the horizon. But later in the morning when I walked a more crowded beach with her under the full glare of the Florida sun, I was wondering why in the hell Yankees thought it was such a good idea to move down there. 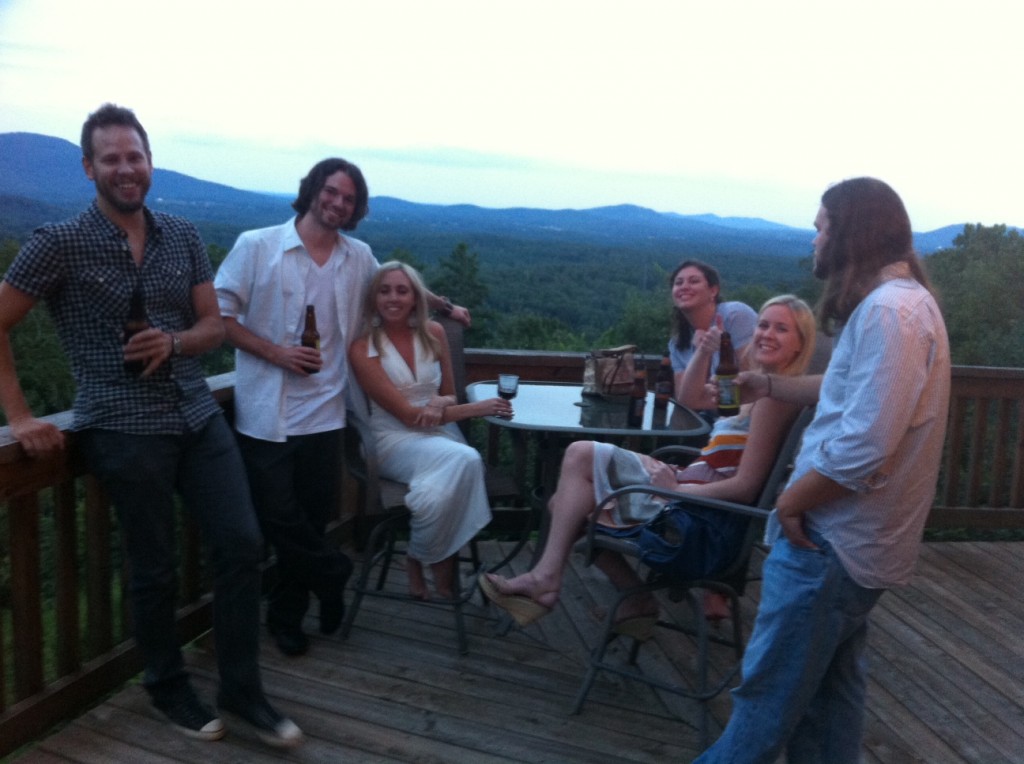 Jon Buttry, second from left, with his bride, Jamie Mayo, and the wedding party, at a rehearsal dinner in the mountains.

The sun can heat up the Georgia mountains, too, but an evening with family on a deck with a mountain backdrop is sublime. While this was another family gathering, we didn’t have as many family members around this weekend. My companion and I were the only members of our family outside the groom’s immediate family who made it to Helen, Ga., for the wedding. You want to give the immediate family a little space on the wedding day itself, so we took a drive through the mountains.

A drive along the Richard Russell Scenic Highway and several other country roads gave us countless views of green mountains and rustic Babdiss churches. Helen itself is pretty much a tourist town (if Goats on the Roof, the Goofy Rooster Corn Maze and a roadside stand offering fresh-cooked pork rinds qualify as tourist attractions). It’s a German town that was celebrating Oktoberfest in September. But along the back roads we found some true Southern flavor: 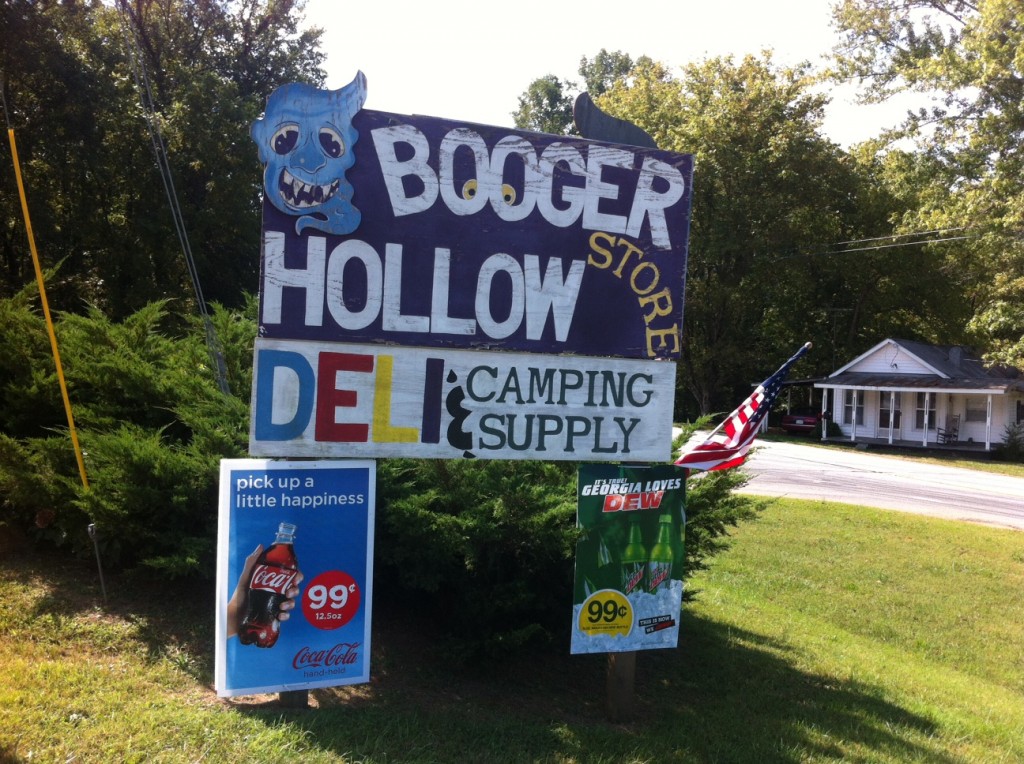 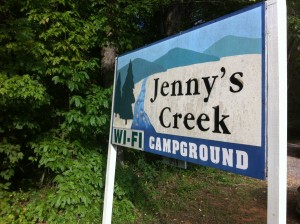 Even after venturing to Booger Hollow, I should not too hastily stereotype this rural area. Our “cabin” had wi-fi, a pool table, a hot tub, a Jacuzzi and satellite TV. Even a campground down the road offered wi-fi (though I was not able to get a signal on my phone from the farm where Jon and Jamie were married).

Kellum Valley Farm was a beautiful setting for the wedding of a boy who grew up in Philadelphia and Detroit and moved as a man to Atlanta. The wedding was in a pasture, thankfully fenced off from the goats wandering the adjacent pasture. We sat on hay bales covered with lace. This city boy’s eyes itched a little, but I made it through the ceremony without a sneeze. The reception was in the ruins of an old school and dormitory, which burned down in 1928. Like our father before him, my brother Dan is a Baptist minister (a missionary) as is his wife, Sharon. They officiated at the wedding, as Dad officiated at Dan’s. 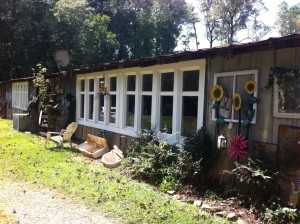 A Victorian Cowgirl does business in a converted chicken coop.

On our pre-wedding excursion along the back roads, a “cowgirls” sign beckoned my companion and me down a narrow, bumpy gravel road to a chicken coop that has been converted into a boutique. My companion dreamed of being a cowgirl when she was young. Now she indulges her granddaughters in such things as pink boots and rocking horses. We figured she’d find something for herself or the girls. Our flight home became much easier because the shop didn’t have any pink boots or hats in little-girl sizes. But Granny did not come away empty-handed. I guess Booger Hollow and Goats on the Roof fulfilled my expectations of these mountains more than A Victorian Cowgirl, which I might have expected to encounter in Wyoming or Nottingham.

Then again, Dad, Dan, Jon and I are living lives that Grandpa Buttry could never have anticipated when he left the Appalachians. It’s nice to see that the mountains provide such a varied life — still some hillbilly stereotypes, but also wi-fi, cowgirl chic and a lovely place for city folk to make sacred commitments.

My companion and I generally blog our different views of the same trip, but she’s not planning a post about these wedding trips. 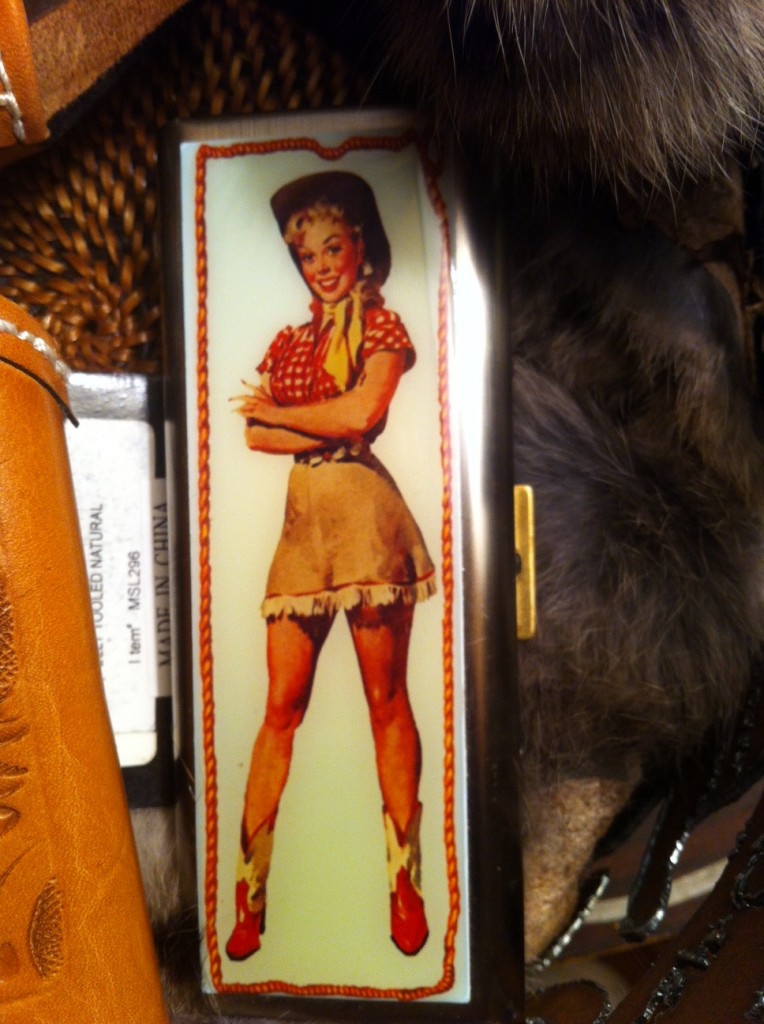 My companion decided she needed this tin.

One thought on “Visiting the Georgia mountains, I celebrate family past and present”