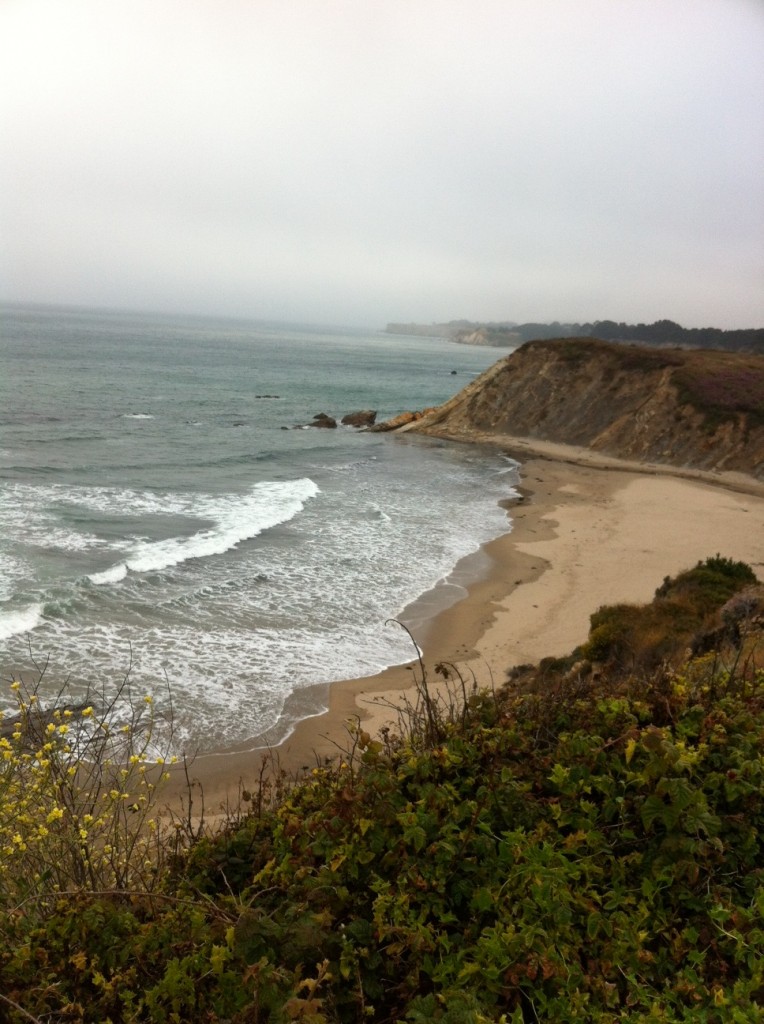 The Pacific Ocean from a turnout along the Shoreline Highway

I spent the weekend feeling small. And it felt great.

In the song, “I Hope You Dance,” Lee Ann Womack sings, “I hope you still feel small when you stand beside the ocean.” Well, Saturday, I stood beside the ocean. And then beside giant redwoods. And then drove down roads darkened by so many redwoods they blocked the sun at midday. Then I drove through mountains. Finally I looked down on the Pacific from atop cliffs. Sunday I was back beside the ocean. As I write this, waves thunder on the beach outside our hotel room.

I felt tiny and insignificant all weekend. And grateful.

Work brought me to Northern California last week, visiting Digital First Media newsrooms in seven different communities, ending Friday in Eureka on California’s northern coast. I resume the newsroom tour today in Monterey, nearly 400 miles south of Eureka. But we had the weekend to make our way down the Golden State’s shore.

My companion and I started out by heading north. Our first stop, Patrick’s Point State Park, didn’t pan out because the trail to the beach had washed out. So we continued north into Redwood National and State Parks. Of course, it was the giant trees that drew us there. But the visitors center was along the coast, with a beach just beyond, so we walked out to see and hear the waves. On a foggy morning, the ocean was gray rather than blue, not its prettiest, but still powerful and peaceful at the same time.

The foggy beach at Redwood National and State Parks

I’ve felt the awe of the ocean on many visits to both the Atlantic and Pacific shores up the coasts of Canada and the United States. We felt that sense of wonder again and again Saturday and Sunday, driving along the Pacific Coast at such spots as Bodega Bay, Pacifica, Half Moon Bay, Santa Cruz and Monterey. We’d look down on the ocean from cliffs and walk beaches as the waves rolled in.

I love almost any mountains and certainly enjoyed driving through several mountainous stretches on this trip, climbing steep grades and soaking in the views as we descended.

But it was the trees that took top billing on this trip. I like mountains and oceans more than I like trees. But I have never seen trees like these.

A ranger recommended we stop at the Big Tree Wayside, so we did. The tree’s name was accurate, but understated. 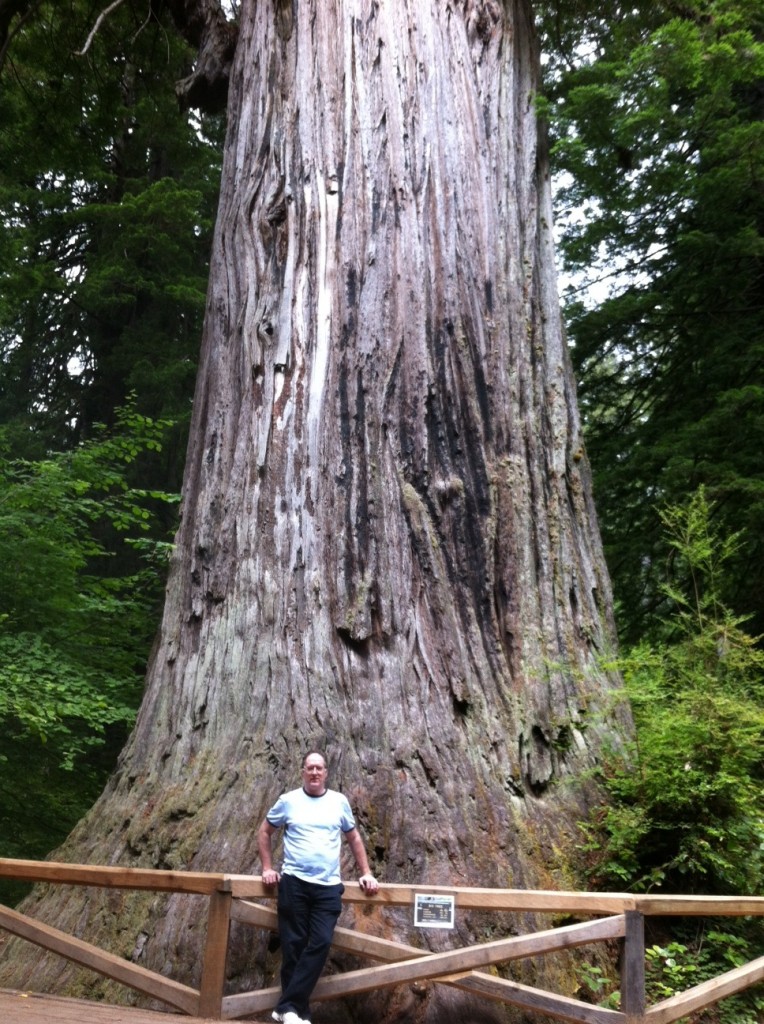 The big tree and me

Read the numbers on the tree at the right. This tree has been around 1,500 years. I was a history major in college and I can’t even recall what was happening in the 6th Century, so I looked it up in Wikipedia. That tree dates to the time of King Arthur, Beowulf and Mohammad.

While the Big Tree got its own special stage with a sign and stats, it was surrounded by hundreds of lesser giants that appeared to have been around for only a millennium or so.

My companion and I hiked among the redwoods for a half hour or more, enjoying some special private moments as we shared our awe at the surroundings.

We wondered whether the massive trees that are joined at the base — we saw several twin giants and one set of triplets — were branches of the same original tree or whether they were separate trees that started out yards apart but their trunks fused somehow as they grew together (if you know the answer, please tell us in the comments).

Fascinatingly, many of the trees seemed to have taken root in the decaying wood of fallen giants.

After hiking around the Big Tree, we enjoyed more redwoods for another hour or more on our drive south through the Avenue of the Giants, marveling at more redwoods and enjoying shade that borders on darkness.

Redwoods are difficult to photograph, particularly with my skills and equipment. But I tried: 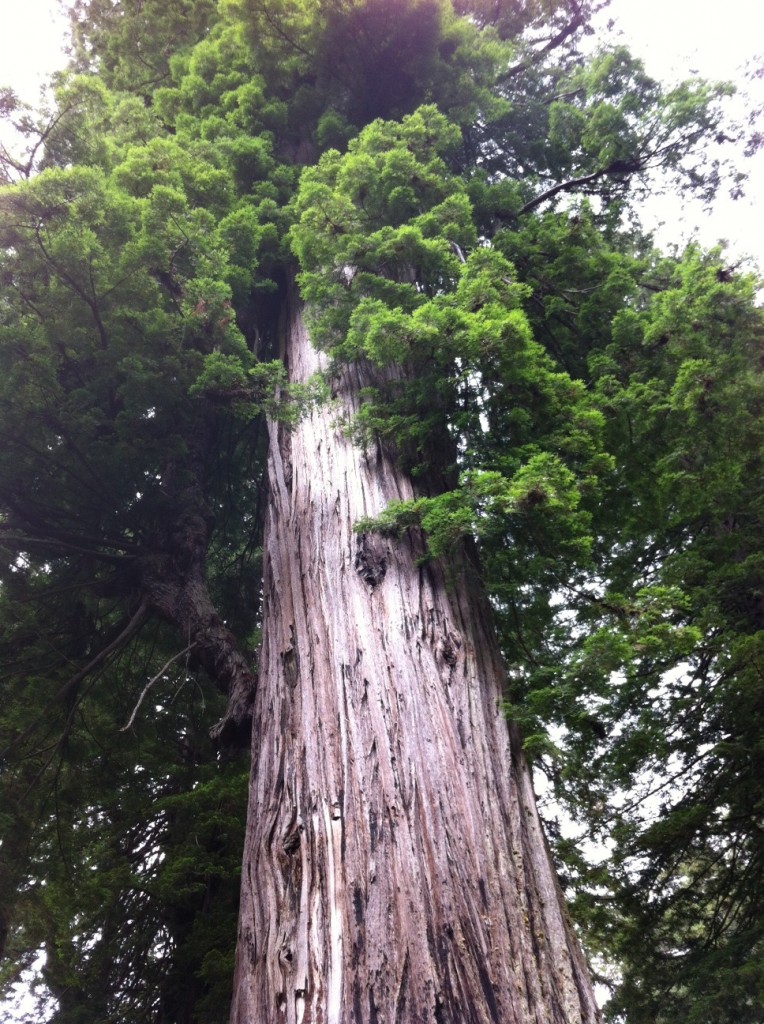 Photos don’t show how massive redwoods are. The photo of me beside the Big Tree shows off its massive trunk, but doesn’t show how tall. Shooting up from the base, I can’t see the top. 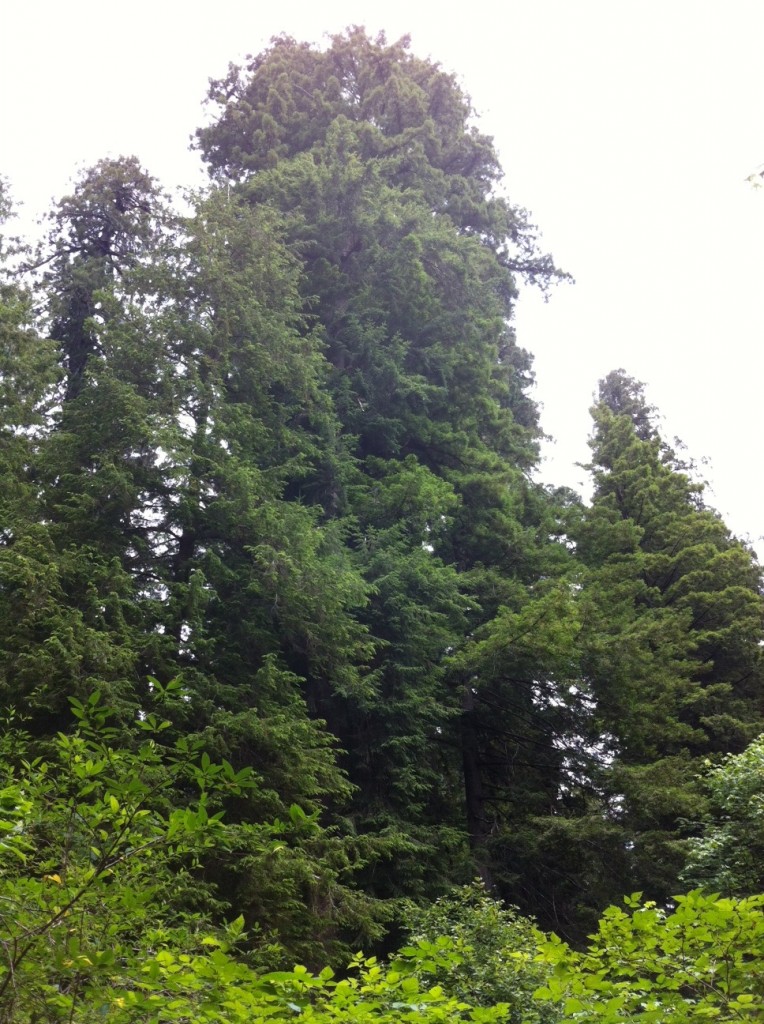 From a distance, I can show more of this tree, but not the trunk. And anything looks smaller from a distance. 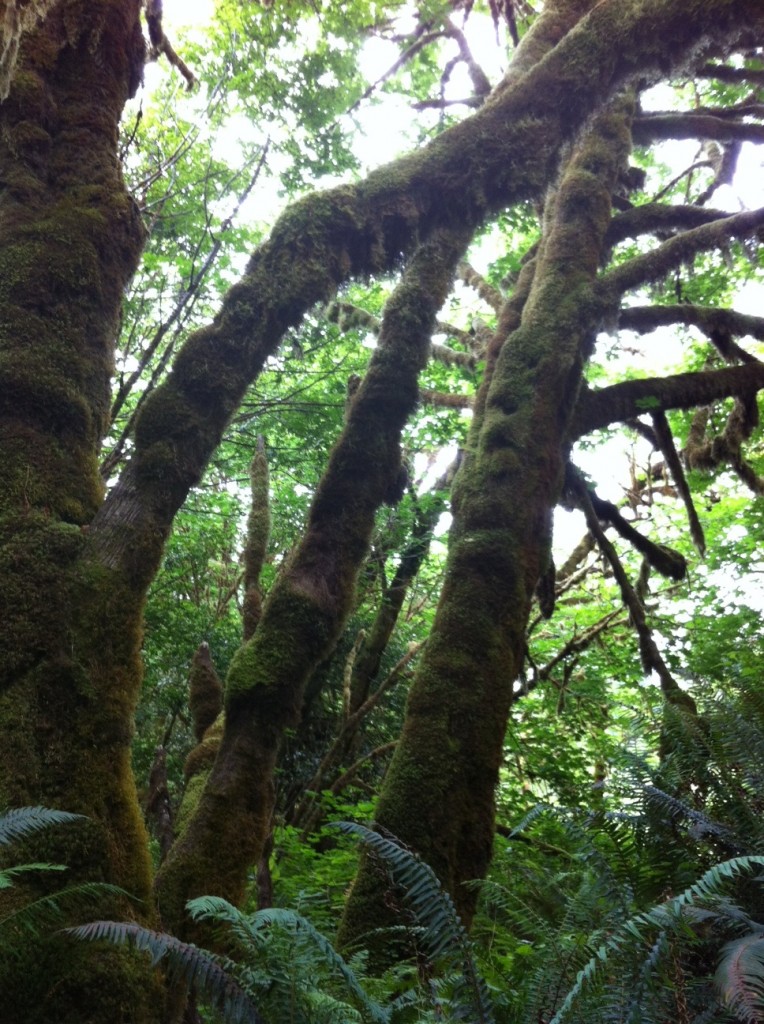 Some trees were covered with moss (not sure whether they were younger redwoods or another tree, but they weren’t the giants. 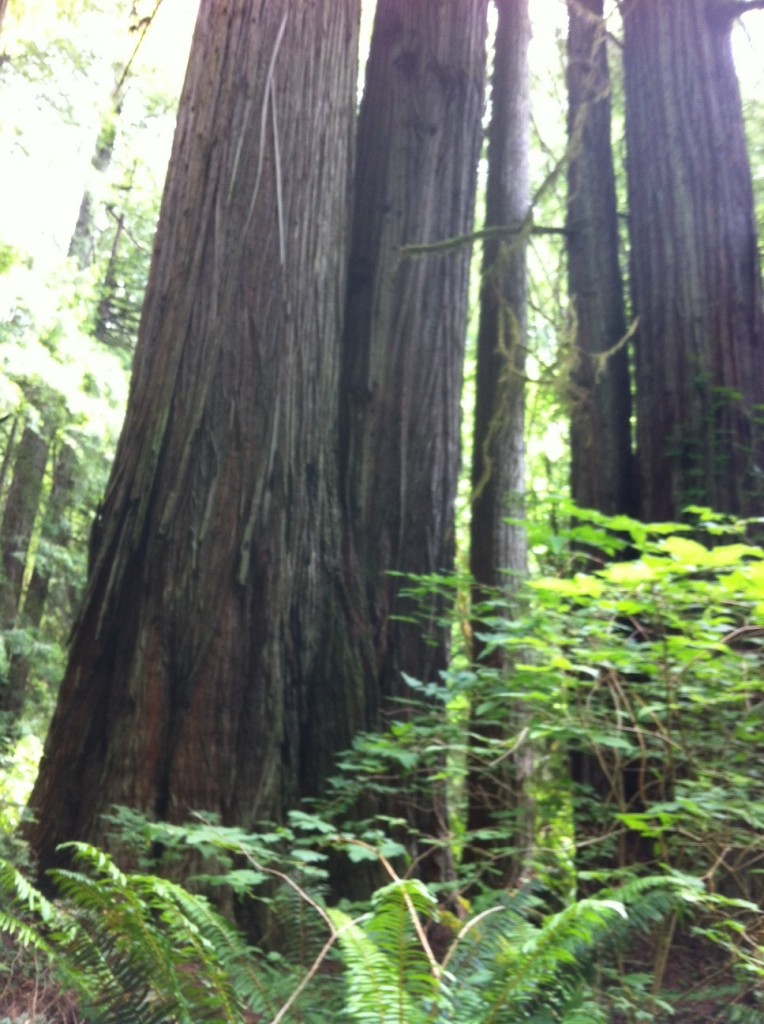 We saw many giant pairs whose trunks were joined together at the base. 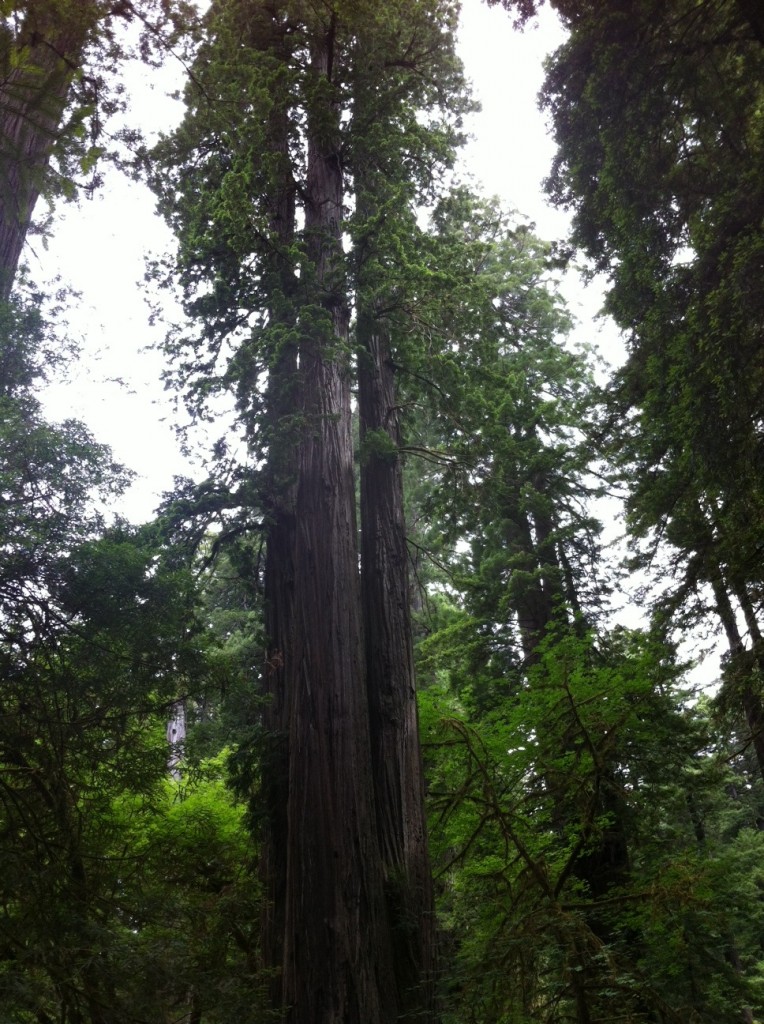 This was a triplet giant, three massive trunks joined at the base. 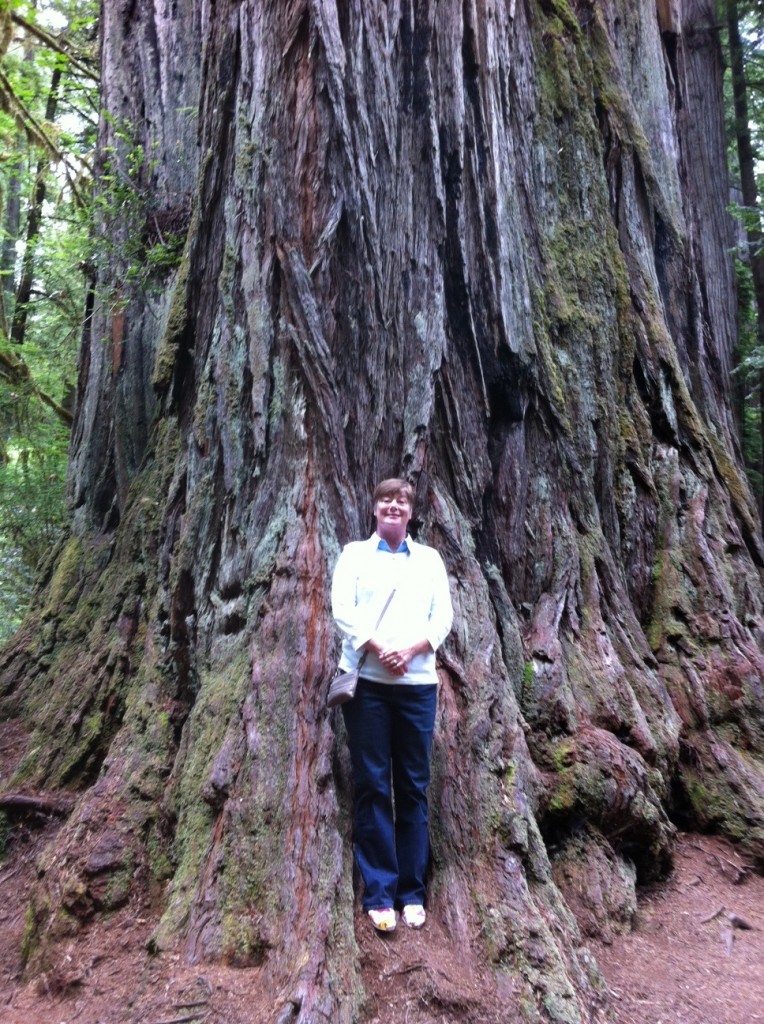 My companion stands at the base of the triplet giant. 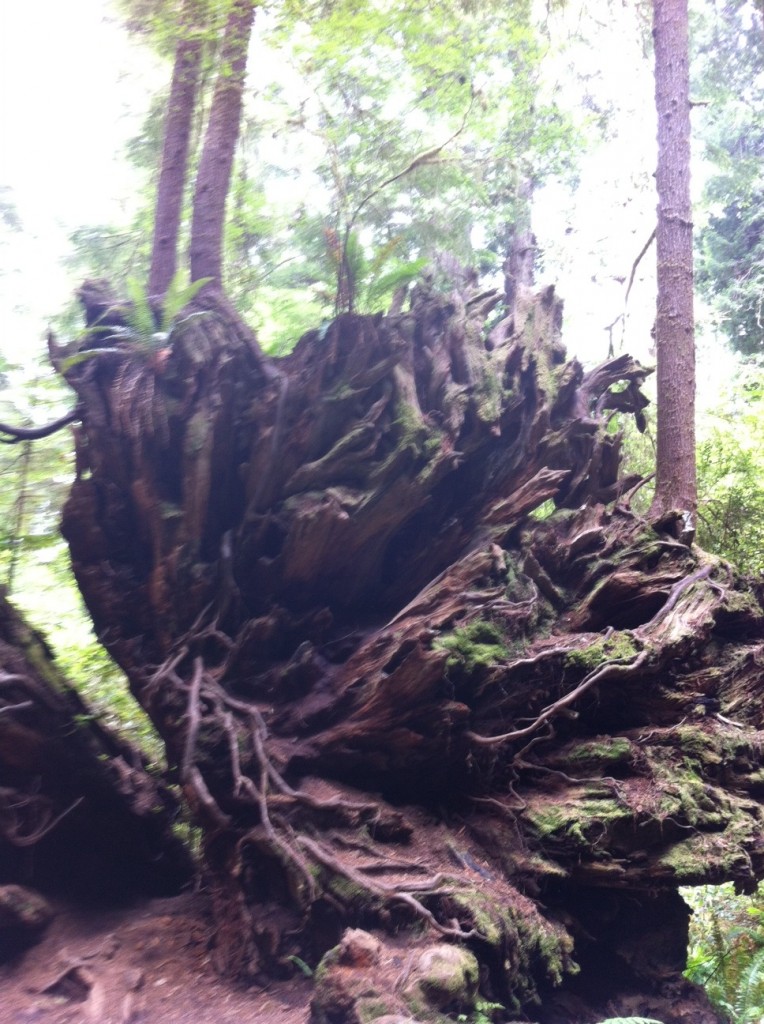 Maybe these will be triplet giants someday: three redwoods (two at the upper left, one at the right) growing out of the gnarled roots of a fallen redwood. 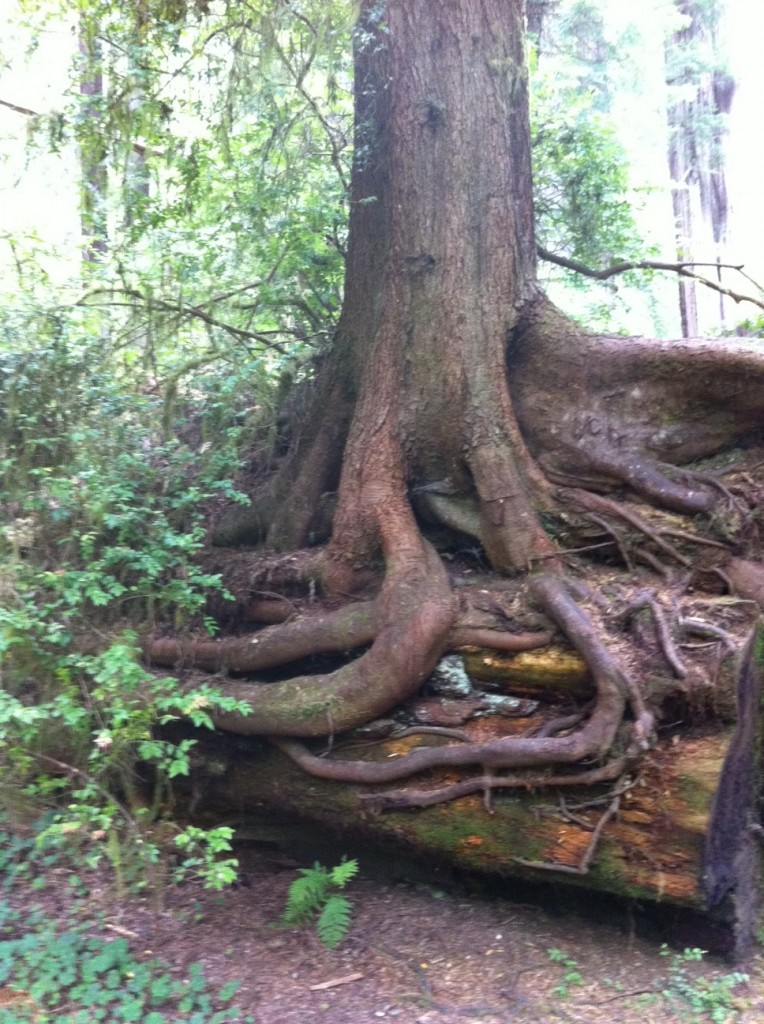 The roots of a redwood reach down through the decaying log that it’s growing from. 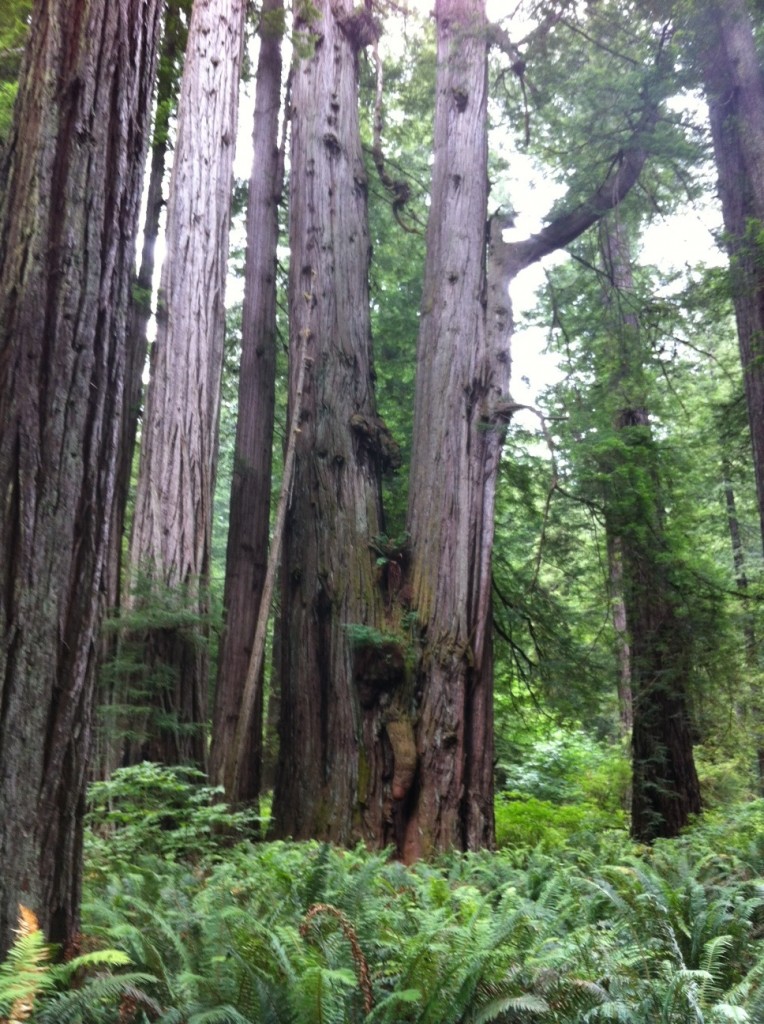 As if I wasn’t already feeling tiny enough, my companion pointed out that one of these trees — um — appears to be male.

2 thoughts on “The Pacific and the redwoods: I felt tiny”