I started my last blog post saying that I believe in facts, not jinxes. That bears repeating after this tweet from my traveling companion:

Well @stevebuttry is a rental car line. I may be a jinx for the Yankees, but no one has more travel woes then Steve.

Here are the facts:

When flights or trains arrive on time with no problems, one tweet suffices:

Landed in Halifax. Off for 2 days in Cape Breton. Depending on wi-fi at inn, may be off the grid for a while.

My tweeps yawn, if they notice at all. But a delay needs a little explanation and, well, I have time to explain. If the delay lasts hours because of a fatality on the tracks, I livetweet the whole thing. People retweet and spread the word and a Twitter mini-legend is born.

Earlier this month, my former colleague Sam Chamberlain, traveling in New Hampshire, speculated that I must be around somewhere because his travel was delayed (I was in Pennsylvania).

Flight delayed until 10:55. When the eff did @stevebuttry show up in the Granite State? #talesoftravelwoe

Here are the facts about my Amtrak travel over the past few years: I’ve probably taken somewhere between 15 and 20 train trips between Washington and other cities along the East Coast: Trenton, New York, New Haven. Three of them have had significant delays.

The third was today. My traveling companion and I were returning from a trip to New York. Our Acela ride to New York Thursday was uneventful, and we started our return trip optimistically:

Heading home after a great visit to NYC. Penn Station is crowded this morning.

This was my first return trip from New York since the one that was halted by a suicide on the tracks in February. This trip was also uneventful. Until we reached Philadelphia. The tweets pick up the story there:

My last Amtrak trip from NY to DC was delayed 3 hours by a fatality on the track. Now we’re thrown off in Philly for a “bridge problem.” — Steve Buttry (@stevebuttry) June 10, 2012 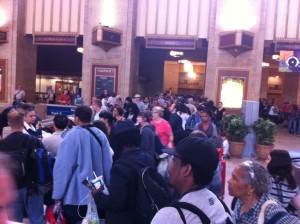 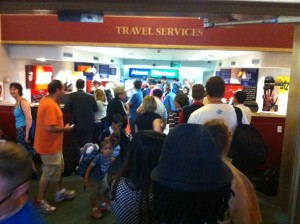 Avis didn’t honor our reservation, but we were working w/ another guy whose reservation worked.

@stevebuttry how on earth can they just not honour your reservation? that’s what a reservation is for, surely? #mindboggled

@stevebuttry @Suw As usual, Seinfeld has addressed the subject: youtu.be/A7uvttu8ct0

My horoscope for today said I would have dealings with a stranger. @stevebuttry and I are now in a rental car with man named Allen.

@stevebuttry I’m surprised even your wife travels with you. Hell, I’m surprised any conveyance sells you a ticket. @mimijohnson — Jeff Jarvis (@jeffjarvis) June 10, 2012

@stevebuttry @jeffjarvis Getting there is never the problem. Getting *back* on the other hand … — Mimi Johnson(@mimijohnson) June 10, 2012

@stevebuttry @jeffjarvis @mimijohnson it was to lull you into a false sense of security. #travelhex

But I’m not patient. RT @Amtrak: @amtrak Service WAS – PHL disrupted due to bridge problems. Repairs continue. Thank you for your patience. — Steve Buttry (@stevebuttry) June 10, 2012

4sq tip when I check in at Union Station says Philly is just 133 miles away & I should take train for an enjoyable weekend. Um, no. #Amtrak

Thanks to @alangura, with whom we shared rental car for pleasant ride from Philly to DC after #Amtrak canceled our train halfway home.

It’s a brave soul who willingly travels w/@stevebuttry: RT @stevebuttry Thanks to @alangura, with whom we shared re… tl.gd/hpkgbn

Developing an app to let me know when @stevebuttry books airline, train, boat travel, so I can avoid #TravelTrauma.

great meeting @stevebuttry & mimi in philly, thanks for sharing car back home when #amtrak decided not to work again.

so @amtrak, do we get refunds because our train was “canceled” halfway home, or do I just tell the credit card not to pay you?

see, @amtrak, I paid for “acela” “business” service, which is not 10 hours or whatever it was in the end from NWK-WAS.

you know, @amtrak, when your airline competitors screw up this bad, they are pro-active about apologies and service credits.

I’m a stubborn guy and half of my brain is trying to count up all the plane flights I’ve taken that landed on time without incident (and you can see I already did that for train trips), so I can blow this bogus legend away with the facts. But maybe it’s time to follow the advice of the editor of the Shinbone Star and just embrace my Twitter travel legend.