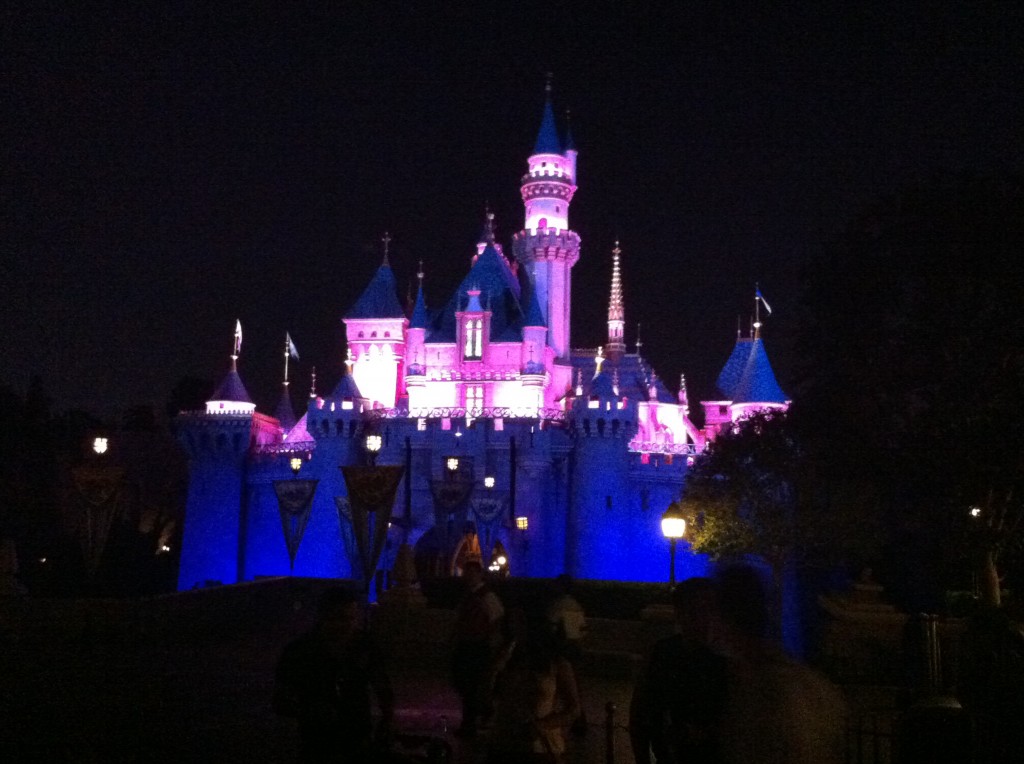 On Sunday morning I took a quiz I found on Facebook. Yes, I know – they are often inaccurate, rarely insightful, and almost always inane. But I had a little time to burn before I Skyped with my granddaughters, and figured what the heck.

This quiz was designed to reveal what your political leanings say about you. I answered as honestly as I could, within the confines of the questions, but many of my answers didn’t fall neatly into any of the limited responses offered. The results returned said that I was a political centrist. (Something I’ve been trying to tell my more conservative relatives for years, but that’s another blog post.) It also said I am a rather hardheaded realist, egalitarian, and strongly pragmatic.

Not the stuff whimsy is made of.

Which made me a little sad because, as a child I was as whimsical as they come. My interior life was always far more compelling than my real one. I was the kid who frustrated teachers because I was reading ahead in the book, or writing stories of my own, or simply daydreaming their voices away. My imagination was full of magic, ghosts, pirates and fairies. In my world every dog could talk, every cat was a witch in disguise, and every song on the radio was the soundtrack of the movie playing in my mind. When my poor mother would shout, “Could you come back to earth for just a few minutes?” my inner narrator boldly replied, “Desist, old beast, lest my magic wand banish you to Timbuktu.” Not that I ever dare spoke that aloud.

So I looked at my quiz results with a sigh. What a long way I’ve come in my adulthood. Pragmatic. With that single word the magical puppies of my dreams whimpered and died.

My companion and I were spending the weekend in Anaheim, California, where he was a speaker for a journalism conference. The hotel where we stayed was just a few blocks from Disneyland. When we decided I’d accompany him on this trip, I mentioned that as a little girl, going to Disneyland was my greatest wish. Every Sunday night when Walt Disney’s Wonderful World of Color came on, I longed. I yearned. I was certain that Fantasyland was made just for me, personally. And I would beg my father, please, please, can’t we go there someday?

He would sigh and say no, probably not. My mother had given us all the greatest of gifts when she agreed to be his wife and live on an Iowa farm, raising her children so far from any of her relatives. Whenever we had the time and money for a long trip, it had to be to the East Coast so she could have time with her people. My grandmother and uncles lived in Bayonne, New Jersey – a land so devoid of fantasy even my vivid imagination could not imbue it with a scintilla of magic.

So my companion on this trip naturally assumed I would grab my chance to finally enter the Happiest Place on Earth. It should be noted that he has always been clear that his kind of “Fantasyland” is a very adult place that has never been populated by Mickey, Pluto, and certainly not Goofy. He is not the sort to suffer through an animated movie, let alone willingly go to someplace where people costumed as those same characters march down the street. But he would never keep me from going, so when we arrived he smiled as he handed over the conference’s complimentary passes to The Magic Kingdom, ready to witness my joy.

I shrugged and told him I didn’t want to go. His face fell.

I had work I wanted to get to, I explained. Besides, it was supposed to be terribly hot. Who wants to see a sweaty middle-aged lady drooping around the streets of magic all by herself?

And Saturday was hot, well over 90 degrees. On my way to the hotel pool I watched shuttle loads of families, swarming with deliriously excited children and felt confirmed in my choice. Poolside I read, took notes, and dragged my lounge from the sun to the shade as necessary. When my companion came in that evening he seemed a little nonplussed when I told him how I’d spent my day. “No Disneyland?” Nope, I told him. I got some good work done. And even better, the pool bar makes a killer Moscow mule.

That evening I saw on Twitter that some of the conference attendees had gone over to the theme park for the fireworks. And something deep down inside me stirred. One of my sisters lives in Florida, and she told me once that she loves Disney World because it brings out the child in everyone who goes there. And looking at the Twitpics, I remembered those Sunday nights, watching Tinker Bell on our new color TV splashing sparks and gorgeous colors from her wand. But … naw, my childhood was long gone. No way was a hardhead realist going to resurrect that silly little girl.

While my companion dressed the next morning, he asked again if I would be going Disneyland. I was sleepy and, well, maybe a little cranky. “You don’t want to go,” I snapped, “so why are you surprised that I don’t?  I don’t like crowds, I don’t like noise and I hate long lines.” He beat a hasty retreat.

But somewhere a Fairy Godmother was determined to change my mind.

Riding down in a crowded elevator to find my morning latte, still grumpy with a baseball cap pulled low to cover my bedhead, I heard a little guy somewhere in front of me pipe, “Mommy, that’s the song from Cinderella!” And sure enough, the elevator music was playing “Bibbidi-Bobbidi-Boo.” And I unwillingly smiled, remembering that my mother had given us the soundtrack from that movie and how I loved the song.

In the Starbucks line I found a group of guys, all young journalists judging from the conference lanyards around their necks, merrily (and probably still slightly tipsy) arguing about the correct words to, “When You Wish Upon a Star.”

Finally caffeinated, and a bit closer to civility, I sat in a lobby armchair with my drink and iPad. Concerned about Syria and the violence there, I though I’d read about what was said on the morning news shows, while giving the staff time to make up our room. I picked a quiet spot, well away from the hubbub of people waiting for the next Disneyland shuttle. But then a dad and his little girl came and sat down on a sofa not far from me.

She was soft-spoken child, much quieter than the rest of the kids, so I couldn’t really hear their conversation. They’d obviously been to Disneyland the day before and were going back for more. She wore a Princess Jasmine t-shirt, complete with glitter. Her tight pigtails kept her mouse ears from fitting correctly, so she reached up and perched them on her father’s head. They were far too small for him, but every time they slid off, she’d crown him again and they’d smile at each other. She also clutched a sparkly wand and favored her dad with an occasional bop which caused him to make funny faces and falsetto noises that made her laugh. Silly things, both of them. But eyeing them from under my baseball cap, I knew that they were making the kind of memories that would sustain them both for years to come. When life got hard, they’d look back on this sunny, warm California morning and remember when life held a bit of whimsy and a whole lot of love.

Still watching them, I pulled out my phone and sent my companion a text: “Can we plan on going to Disneyland tonight for the fireworks?” Even as I hit send, I thought I knew the answer. More than once he’d referred to theme parks as, “a new circle of hell.” But before I could even pocket the phone, it beeped with the reply, “Sure.”

The evening was clear and cool. Our first stop was at the Great Moments with Mr. Lincoln exhibit. Not many kids were in the auditorium to watch the amazing (if somewhat creepy) Lincoln robot, but it seemed like a good way to ease two oldsters from their very pragmatic worlds into a more fanciful realm.

It was congested when we left the exhibit due a parade of chimneysweeps(“chim-chim-cherrie”) and for a moment I had misgivings. There are few things that bring out the curmudgeon in me faster than a sea of humanity, and I gave a fleeting thought to fleeing for the park exit. But as we skirted the crowd, and moved onto the main thoroughfare, I stopped and just stared. 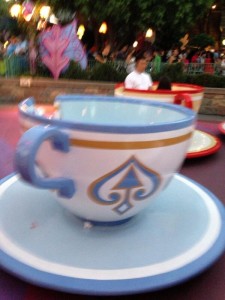 Finally I rode a tea cup

“It won’t be dark enough for fireworks for quite awhile,” my companion was saying. “Where do you want to go?” “There,” I pointed. It was where I desperately wanted to go as a child, and where, to my honest surprise, I found I still wanted to go. The castle. Sleeping Beauty’s Castle.He snorted a self-satisfied, “I knew it.”

Ah, Fantasyland, how could I have denied you? We gazed up at the Matterhorn. We laughed and twirled and got wonderfully dizzy in a baby blue teacup. Then we boated serenely through a “small, small world.” At the ice cream parlor we laughed together, while my companion had butter pecan with hot fudge and I had chocolate chip cookie dough with sprinkles. We didn’t talk about work or worries, sorrows or disappointments. And we didn’t count one single calorie. 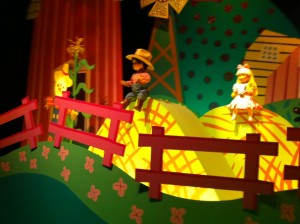 Part of the “Small World” looked a bit like Iowa, where I grew up

The park is crammed with things to buy. Even though I declared upon arrival that there couldn’t possibly be a single thing I wanted, I soon found myself with a bag holding wands for each of my granddaughters, and a sequined t-shirt with Sleeping Beauty’s evil Maleficent for myself. (Why the monstrous queen who turned herself into a dragon? I don’t know. I just identified.)

It finally got dark and my companion stood with his arms around me while we watched the fireworks. Stars went shooting, Tinker Bell came flying and kids young and old oohed and awed. During the grand finale, another Cinderella song played over the sound system, and one line seemed particularly poignant: “No matter how your heart is grieving, if you keep on believing, the dream that you wish will come true.”

Realist, pragmatist and yes, sometimes even a pessimist, my head had told me to put whimsy aside. It was time to stop believing. But happily, my head was mistaken. You see, a dream is a wish your heart makes.

2 thoughts on “Can a pragmatist remember how to dream?”